Salome (, Sarome?) is a member of the Kamisato Faction and Kamisato Kakeru's non-blood-related younger sister.[1]

Salome was the daughter of King Herod, who is infamous for performing a seductive dance before her father in exchange for the head of John the Baptist.

Salome has long silver hair, rolled up on either side of her head like disks or demon horns,[2] and tanned skin. She wears two translucent hooded raincoats with nothing underneath, and goes barefooted. She wears a palm-sized plastic pocket watch on a thick string around her neck. She also carries a long sports bag with a shoulder strap.[2]

Salome is an individual considered by many to be crazy, who is quite willing to kill and takes a thrill in hunting targets of value.[3] She is quite reckless, perfectly willing to provoke dangerous individuals and put her life at risk by sacrificing and replacing her own body.[4] Salome recognizes that she is an insane monster and embraces her reputation as a mass murderer to a certain extent, however she also recognizes how she will likely receive her just desserts as a result of the path she's chosen and follows her own set of rules - she doesn't like targeting defenseless commoners or innocents, and won't kill if it wouldn't benefit her brother in some way. She also recognizes and acknowledges when others are also crazy, in a similar or different way to her, even when they themselves might not be aware.[5][6][3]

Though she does what she does for her brother's sake, she isn't blindly devoted to him in the same way as the other members of the Kamisato Faction, whom she holds a degree of contempt for, and will act against his wishes if she deems it necessary.[3] She lacks the conflicting desires necessary to be affected by World Rejecter.[7] It appears that she has mellowed out a bit since meeting Kamijou Touma as stated by Kamisato.[8]

According to Kamisato, Salome is a terrible cook and hates to be told so.[8]

Salome has a frank manner of speaking, like that of a gyaru, and has a tendency to end sentences with ", don’tcha think?" (～っしょ, ~ssho?). She also has a good luck charm which she performs as a sign of resolve, where she grabs and kisses the toy pocket watch she wears around her neck.[5][6][4][3][9][10]

The full circumstances behind Salome's family aren't known, however Salome is known to have lived with the family of her non-blood brother Kamisato Kakeru.[1][3] Around this time, she was already broken. Growing up together, Kamisato apparently taught Salome how to ride a bike and use chopsticks, held her hand to school, helped her with homework and gave her advice when she received her first love letter from someone she didn't particularly like, among other things. As Salome was often late, he once spent his allowance on a toy watch for her, which she treasured ever since.[3] At another time, the two played an election game together, with Salome using assassination tactics while Kamisato preferred luring his opponents into committing crimes and placing them in the category of criminal.[11][12] Though there wasn't anything particularly special about him, his normality and caring attitude towards Salome despite her being a twisted killer led to her falling for him.[3]

Salome eventually ran away from home, though she sometimes showed up at school despite doing so. Her parents submitted a missing persons report, but neither they nor the police seriously tried to find her, fearing and wishing to avoid blame for not fulfilling their responsibilities, with an arrest at that point likely to make things worse for the police.[3] As a 'mass' murderer, Salome tended to target groups such as end-time cults or divers carrying packages from the sea at night.[3] However, while others were merely glancing her way, Kamisato continued to look straight at her and spoke to her, often scolding her about killing being wrong.[3] He didn't abandon her like everyone else and Salome looked up to him, up until the time when he received World Rejecter and the Kamisato Faction gathered around him.[3]

At some relatively recent point in time, Salome sacrificed her body to her magic and replaced it with an artificial one.[4] At another point, the Kamisato Faction, considering her too much trouble to deal with, incapacitated Salome by using some electrodes to cut off her neurotransmitters and keep her brainwaves below a functional level, altering the direction of her consciousness to trap her in a mental labyrinth.[1][11] However, as the faction moved to Academy City as Kamisato targeted Gremlin and Kamijou Touma, Sunny and Rain removed the electrodes and were subsequently attacked by her.[11] Salome then took a list that they had of individuals linked to the Kamijou Faction and smuggled herself into Academy City in a plane's cargo compartment.[2][4]

During the Element infestation and the subsequent heat wave in the city caused by Fran to slow them down, Salome and the rest of the Kamisato Faction set up base in the White Springs Shopping Center.[13][14] Late on December 8th, she and several others intervened after Kihara Yuiitsu ambushed Touma and Misaka Mikoto's group at Tokiwadai Middle School, bringing Touma back with them. When Touma woke up and heard what had transpired, he angrily reproached Salome for waiting for Yuiitsu to attack Mikoto and others. A slightly scared Salome eventually assured him that the girls were OK while clinging to her brother, who remarked on how Touma was better acting as a brother than he was.[14]

On the morning of December 9th, Salome participated in the faction's march to the Windowless Building,[15][16] and the subsequent battle with Yuiitsu beneath it, making use of her magic against Yuiitsu's Anti-Art Attachment.[17][18] After Kamisato was forced to use the World Rejecter with conflicting desires to protect the others, despite Salome's pleas, and was exiled, Yuiitsu used the threat of losing the possibility of saving him to force the Kamisato Faction to obey her. Despite her fury towards Yuiitsu, Salome reluctantly attempted to kill Touma with the others on her orders.[19]

Salome's main spell is External Offering (外的御供, Gaiteki Gokū?), Celtic-based sacrifice magic which allows her to destroy and offer up weapons to a god, in her case the sea god Manannán,[5] in order to increase her strength and gain the destroyed weapons' traits. The requirement for this spell to work is that she needs to be able to destroy the weapon with her own hands. Because of this, she can't absorb something if it's too powerful or if it doesn't function as a weapon. She can keep absorbing power from lesser weapons in order to increase her overall strength and be able to destroy more powerful weapons, building up a continuous chain of destruction that rapidly and indefinitely increases her power. However, if she doesn't sacrifice a weapon within three minutes of the last sacrifice, her "chain" will break and the absorbed power will vanish.[6] Salome can freely rearrange and combine the attributes of the weapons she has absorbed to modify her attacks, being able to produce invisible blades with various attributes by simply swinging her hand. The power, range and shape of these blades changes as Salome's chain of absorbed weapons increases.

Salome's secondary magic is Internal Offering (内的御供, Naiteki Gokū?), a type of Celtic sacrifice magic which offers up parts of her own body. Salome has abandoned her original body using a chemical cyborg treatment and she gradually offered up her spare flesh and blood to her god as she did so in order to drastically raise her physical abilities. Her constitution leaves her apparently immune to pain. She also doesn't bleed from injuries, and can continue living just fine even if her artificial body is maimed. Losing an arm doesn't slow her at all,[4] and she can survive having the lower half of her body being destroyed[20] and even continue living and talking as just a head.[21] Thanks to this artificial body, Salome still possesses a degree of superhuman strength even without her External Offering, being capable of breaking normal weapons such as a katana barehandedly.[22] Her special body also makes Amata's and Yuiitsu's shockwave technique ineffective.[23] Salome refers to her body as her "battle body" that lacks organs unnecessary for battle, which made Touma suggest she might have spare bodies for other purposes.[20]

Due to Internal Offering, Salome's entire body counts as a weapon. Thus, she can sacrifice parts of her artificial body like her organs to keep her External Offering chain going when there's no more weapons available.[10]

Salome was capable of copying Kihara Yuiitsu's imitation of Amata's technique in a very short time, using it to save Touma when Yuiitsu managed to use it on him by countering the bubbles with her own shockwaves.[20]

Haimura designed Salome based on several ideas like a clione and a wedding dress with transparent lace and many frills. Another explicit detail was the fact that Salome does not have the organs necessary to make or nourish a baby.[24]

Salome has four character design pages dedicated to her, but since the first two were technically nude drawings, Kamachi has prohibited Haimura from hosting them on his blog. Despite this, Haimura pointed out that the nude drawings of Salome were needed to properly illustrate the core of her character.[24] 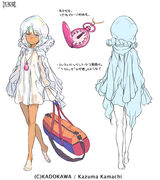 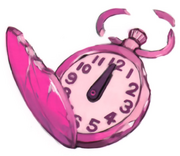 Salome drawn by Haimura Kiyotaka.
Add a photo to this gallery

Retrieved from "https://toarumajutsunoindex.fandom.com/wiki/Salome?oldid=599524"
Community content is available under CC-BY-SA unless otherwise noted.