NT Volume 3
Saronia A. Irivika (サローニャ＝Ａ＝イリヴィカ, Sarōnya A. Irivika ?) is a character introduced in Shinyaku Toaru Majutsu no Index. She is a magician affiliated with GREMLIN and is the primary antagonist in the 3rd New Testament Light Novel.

She was a girl around 14-15 years old. She is a blonde who sported her hair in shoulder length, complementing this is her blue eyes. The most striking of her appearance however, is her green clothes. She wore a green turtleneck and miniskirt, and sported a green hairband seemingly made out of tree branches. Finally, she wore thigh high brown boots and carried a satchel with her.[1]

She is a ruthless character, which complements her ability to control the minds of people. She willingly uses others, even children as a shield or hostage, and as well eliminate people who are a liability to her.[1]

She calls herself as an indoor-type, which is queer since she uses magic that is based outdoors, the forest-enclave magic of the Leshy.[2]

Saronia came from Yekaterinburg and was a member of Russian Orthodox Church. During World War III, the church deployed her to Vladivostok to stop Academy City forces from landing, but had little to do since the invasion was primarily carried out by supersonic bombers. She later disappears in the confusion but later reemerged and has defected to GREMLIN with her goal of having Russia to continue the War with Academy City and its allies,[1] essentially, to force them to make reparations to the Russian Federation which was laid waste after the war.[2]

After World War III, she has begun taking control of several important people in the central government of the United States of America, in order to further plans of GREMLIN.

Saronia's influence is first seen during Leivinia's Birdway's interrogation of Cendrillon after her defeat. Using her mind control powers, she uses it to will Cendrillon in silencing herself, preventing Leivinia to get information out of her.[3]

She later appears for the first time, hinted at somehow using cameras in every part of the island for surveillance. She talking to someone on the cellphone, reporting on how Edward Torke, a person she controlled to attack the Room 4911 where the President of the United State's aide was staying, was taken down by Accelerator and Leivinia Birdway. After the call, she then proceeds to order the loved ones of the people she took control to take out Roberto Katze and took Leivinia, having predicted Leivinia's analysis of her magic. She later issues an order to attack Kamijou Touma as well as use children she controlled to attack grownups in order to cause chaos for her escape, although this bodes well for Leivinia's plan to save the normal people that are being controlled by Saronia. She is later betrayed by the people close to the hostages she controlled, and tried to use the children to attack them if not for the timely effort of Accelerator who has located her, forcing her to flee as both Touma, Hamazura Shiage and the people she used closes in on her. Saronia was cornered until a sudden explosion made by Trident, allowing her to escape. She is later ordered by her superior to proceed with the plan faster as her identity is now known.

Saronia reappears in Pearl Harbor's runway after Touma, Mikoto, Accelerator, Leivinia and Roberto make their to the base. Here, she waits inside a cargo plane with Trigger whilst controlling top military officers in the base. After Touma and company determined that Trigger is still in the base, Touma, Mikoto and Roberto engage Saronia in battle in one of the planes during take-off, controlling the pilot as well. After much trouble, Touma orders Mikoto to blow up the containers in the plane, surprising Saronia as she discovers that Trigger was not with her at all but had been brought in a different route. As a final act, Saronia shoots the pilot and jumps off the plane with a parachute, though, not unscathed as Mikoto had hit her[4]

Saronia later turns up in a motel after her escape. Here, she witnesses and controls a part of the invasion of Hawaii by GREMLIN operatives, and later receives a call from one of the operatives, reminding her that they cannot use the now-controlled Vice-President and by proxy, control the United States of America, since the President has the Imperial Package to send out orders and commands. She later threatens the caller for using her as a diversion to use the Trigger.[5]

She reappears in the operation with Trident soldiers to recover Olay Blueshake's daughter, Lindy Blueshake. She makes it clear to Olay, where her allegiances lie, and her reason for being part of GREMLIN. She later arrives and once again does battle with Touma, along with Kuroyoru Umidori. Having successfully, disable Touma's left arm, he and Umidori are put into a defensive position, he later calls Leivinia in order to determine Saronia's weakness, which she has been hiding with fake information. Saronia later corners Touma, after a Umidori uses magic to collapse the precipice they were on, making the Trident soldiers fall and Umidori weakened severely. With Touma off balance without his left arm, Saronia manages to have an advantage against Touma, all the while Touma tries to figure out the true nature of her powers. The fight is one sided, with Saronia kicking Touma and then using her powers to disable his entire left-side. Meanwhile, Touma slowly pieces the true nature of her powers, and uses Umidori's little cyborg implements to support him, which allows Touma to hit Saronia. Regardless, Saronia continues to attack, using pollen to try and disable Touma who is upon the ground. While Saronia laments the end of the war and the reason for her joining GREMLIN, Touma is able to crawl far enough to the plant Lindy's caretaker planted that is the core of Saronia's enclave and destroy it with his right hand. With Touma's control of his body returning, Saronia is unable to use anything and is terribly beaten by Touma.[2]

She is later captured by American forces and is heavily guarded along with Cendrillon.[6]

Her ability is based on the legend of the Leshy, a male woodland spirit of Slavic mythology. The Leshy is the ruler of the forest and the king of all animals that live there, and loves gambling.

In this case Saronia symbolically makes herself as the Leshy of her surroundings. At first, Leivinia Birdway deduced that Saronia used Russian conifers alone to take control of humans by making them, which will make them symbolically a resident of her forest[4] and then forcing them to gamble their minds, in which if they lose would allow Saronia to control them.

However it is later revealed that it was just a lie. Saronia can actually use any plant in Hawaii for her mind control method, however, she requires the plant to be part of an enclave, a territory that is separate from a governing body, and is within the territory of another. The enclave is what constitutes as Saronia the Leshy's forest, and all who dwell in it as her resident. To create an enclave, Saronia needed to use a plant from an actual Russian forest. The plant would be the core of the forest, though to have a larger enclave, Saronia needs plants and animals native to Russia to exchange oxygen and carbon dioxide with the forest. A more proper enclave would require several cores however. Within that enclave, Saronia can take control of people through suggestions of group psychology. Outsiders of the forest would be punished if they touch something that comes from the forest, such as pollen, in Touma's case, it causes part of his body to become unusable once he touched pollen.[2]

Due to her knowledge of Touma's Imagine Breaker, Saronia trained in an unnamed martial art to use her legs to be able to kick Touma down after she used her trump card on him (disabling his body with her magic).[2]

Appearing in only a single volume so far, Saronia's design remains the same throughout the series. She was designed to look like a different race, and have an archer-class, similar to the characters appearing in role-playing games.[7] 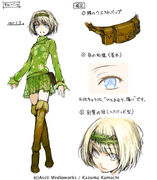