Sekimura Hirotada (関村弘忠, Sekimura Hirotada?) is an anime-original character introduced in the Toaru Kagaku no Railgun S anime series. A bespectacled student of an unspecified institution in Academy City, he is a member of STUDY, a group that desires to show their power in their esper-obsessed city and plays an antagonistc role in the Silent Party Arc.

He is a chubby bespectacled male wearing his black hair as a bowl cut, not unlike Koujun Kikuhiko. He wears rectangular-framed glasses, and is often seen wearing a lab coat over his uniform of sorts, which consists of a buttoned-up collared shirt and pants, both blue-green in color.

Like the other members of STUDY, Hirotada displays a strong desire to show Academy City their power. In doing so, Hirotada is just as willing to sacrifice Febrie, if it means furthering their goal just, as any other member of STUDY, with the exception of the newcomer Nunotaba Shinobu.

Hirotada entered the Academy City Research Exhibition Assembly like Aritomi Haruki. He later becomes disillusioned by the City's focus on esper powers, and joins up with Haruki for the Chemicaloid Project to show the city a different method in creating espers. He later joins up with the STUDY Corporation and continued to the project on their own without the support of other underground organizations.[1]

Like most of the members of STUDY, Kenji often stays inside the main headquarters, contributing to the smooth progress of their leader Aritomi Haruki's plans. For the most part of her appearances, he is silent. When needed to agree upon the next action, he would promptly raise her hand to support that action without any complaints.

He first appears during the experiment of the Diffusion Ghost-controlled Powered Suits on ITEM, he later votes for the next part of the experiment to proceed.[2] He is with the others when Kosako Shunichi becomes acting leader while Haruki scouts the Academic Assembly for Febrie as well as to determine if they're package of Powered Suits planned to attack the venue on the Silent Party has arrived. After Haruki reports on Misaka Mikoto, he also casts his vote in having Mikoto become their next test subject.[3]

He and the other become giddy while waiting for Mikoto's test.[4] Later, they discuss the topic on how the must be wary of dangers and setbacks as the assembly draws close. Madarame Kenji then states his worry in leaving Febrie alone, to which Sakurai Jun tells him that they already voted on that topic yesterday, to which Kenji replies that he is just checking since he doesn't want anything ruining their presentation. Hirotada then mentions that Febrie will be dead before the exhibition, and that they need not worry as she is merely back-up anyway. Jun then says that the exhibition is drawing close and that they should prioritize in tuning Janie. Haruki then asks if the preparations are going well, to which Hirotada confirms and asks Shinobu, who says that she will do her best for their presentation.[5]

Kenji and Jun gather around his laptop while, Kosako notices that there has been a trespassing at the first lab (ITEM wanting revenge). Hirotada asks who the intruders are to which Shunichi cannot determine. Haruki mentions that the first laboratory is a bait with light security and that it will not be unusual if someone took the bait. Jun then adds that even if the intruders found the land, it doesn't matter anymore. Shunichi asks if there are sensitive data, to which he is informed that there is none as it has been move, other than the data regarding the poison neutralizer, the same one that keeps Febrie alives. He later witnesses Shinobu telling them that she will check the first lab to make sure. Hirotada mentions that she will be treated as an intruder as well if she goes there, to which she says she has no intention in getting into danger when the their plan is in the final phases, it's just that she just want to confirm if there won't be a single uncertain variable in their equation.[6]

Hirotada is with Shunichi and Haruki after Mikoto has escaped from their grasps, and confronts Shinobu who has betrayed them. They restrain her with handcuffs. Haruki is impressed by Mikoto's power and asks why Shinobu didn't run as well. Here, Shinobu says that since she was sold into an underground organization, if she escapes then every underground organization would be after her, something that is equal to death in Academy City. Haruki is elated by Shinobu's complacency and tells her that if she did run away then they would've forced Janie to do their bidding. Their, Haruki tells her that she is in the darkness now and that that she should remind herself that as she keeps working for them.[1]

STUDY later moves to their base of operations for the Silent Party alongside Shinobu. The following day, at the day of the Academy City Research Exhibition Assembly, STUDY initiates the Silent Party plan, which involves a four-way offensive against the four facilities that would host the Academic Research Exhibition Assembly. He comments on how Shinobu has been cowed. Before the break of dawn, they make one final vote to carry out the plan, to which everyone other than Shinobu agrees to.[1]

During the Silent Party, Hirotada is confident that they will overcome the many Judgment members that have arrived at the venue to stand against their will. He is later shocked that their plans have gone awry, and is later horrified that Haruki after being confronted by Misaka Mikoto herself, launches the AIM bomb that could wipe the entire city. Moreover, after Haruki pulls out a gun to kill himself, Hirotada completely falls into despair. He is later seen on the floor clutching his head while he continues to despair as the Mikoto and her friends try to stop the bomb.[7]

It is implied that he joined Aritomi and the other associates of STUDY as they were taken into custody for their crimes. 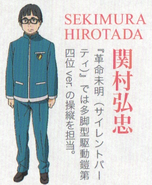 Sekimura Hirotada's character profile for the Railgun S anime from the seventh BD/DVD booklet.
Add a photo to this gallery

Retrieved from "https://toarumajutsunoindex.fandom.com/wiki/Sekimura_Hirotada?oldid=598669"
Community content is available under CC-BY-SA unless otherwise noted.