The Third World War, that the final member of the Roman Catholic Church's secret organization God's Right Seat Fiamma sparked off from Russia, has been ended by the efforts of Kamijou Touma. With that, he vanished. This is a world where Kamijou Touma does not exist. With the Magic Side regrouping, the Sabbath for their followers has arrived.

In the headquarters of the Science Side, Academy City, the strongest Level 5 Esper Accelerator has washed his hands off the "Darkness." Along with Last Order and Misaka Worst, he passes both noisy and gentle, calm days. There is no sign of GROUP.

Skill-Out's Level 0 Hamazura Shiage with the negotiating materials pertaining to the Darkness he acquired in Russia has returned and formed the new ITEM with Kinuhata, Takitsubo and Mugino and began their operations.

Peace has come to the hands of the alumni who have "graduated" from Academy's Dark Side at last. —However, a new evil "freshman" appears before them. 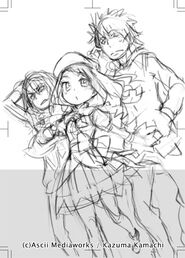 Retrieved from "https://toarumajutsunoindex.fandom.com/wiki/Shinyaku_Toaru_Majutsu_no_Index_Light_Novel_Volume_01?oldid=191138"
Community content is available under CC-BY-SA unless otherwise noted.