The preparations for the Ichihanaransai are over and the time for the festival itself has arrived. The hustle and bustle of excited people fills Academy City. And at the same time... An incident has begun in the underside of the city.

Monsters are gathering around the immortal girl named Fräulein, who has wandered out of Aleister's fortress: the windowless building.

From GREMLIN, the organization that is a mixture of magic and science, comes the spiritual item creator Marian and the lightning god Thor. From the magic side comes the Saints Brunhild and Silvia. From Academy City comes the Level 5s Accelerator, Mugino Shizuri and Misaka Mikoto. As well as Kakine Teitoku who has surpassed the framework of "human".

Many simultaneous battles between these various "strongests" occur and the storm created by these monsters wraps itself around Academy City as the Ichihanaransai takes place.

And amidst it all, the severely injured "weakest", Kamijou Touma, chases after Fräulein! 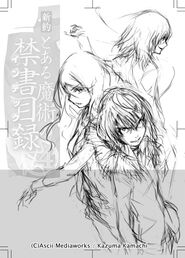 Retrieved from "https://toarumajutsunoindex.fandom.com/wiki/Shinyaku_Toaru_Majutsu_no_Index_Light_Novel_Volume_06?oldid=183332"
Community content is available under CC-BY-SA unless otherwise noted.