(Title to be finalised upon release)

Kamijou Touma has defeated Coronzon on the thin ice. He receives a very warm welcome during the celebration at England's Windsor Castle. Index, Mikoto, and Shokuhou are also there... See New Testament through to the end!

At last, the conclusion to the New Testament arc! A victory celebration with a gathering of heroines in party dresses!

The threat of Great Demon Coronzon who wanted to ruin the world is gone. And after the sacrifice of Academy City Board Chairman Aleister, Kamijou Touma has finally saved the science and magic world.

This is a holy ground for the Anglican Church, the Windsor Castle. During his ardent welcome at the Victory Celebration Party, Kamijou confirms Index, Misaka, and Shokuhou are there. It finally feels like peace has arrived.

Aren't we forgetting something? Yes, immediately after the Coronzon battle. Wasn't Kamijou's right hand supposed to have exploded!?

And then, a monster attacks the Windsor castle. A winged lizard shows itself.

This is when Magic and Science cross paths, and the story that results of that meeting. Don't miss the conclusion to the New Testament Arc! 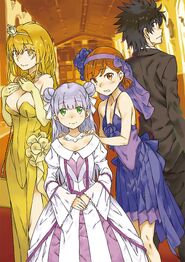 Retrieved from "https://toarumajutsunoindex.fandom.com/wiki/Shinyaku_Toaru_Majutsu_no_Index_Light_Novel_Volume_22?oldid=184129"
Community content is available under CC-BY-SA unless otherwise noted.