Shinyaku Toaru Majutsu no Index SS (新約 とある魔術のSS, New Testament: A Certain Magical Index SS?) is a short story by Kamachi Kazuma included with the artbook rainbow spectrum: notes. The story details Index going out in the city on her own after being given money by Touma, ending with her meeting and confronting a magician.

On a Sunday, Touma gives Index money that she had won using his account for a website that had a puzzle game. Excited, Index leaves with Sphynx for the nearby shopping district to buy Touma a present. There, she meets Mikoto and Kuroko, who are wondering about the place's Monday releases. Finding her, Index says that Mikoto can't have her money because it is important, much to Mikoto's chagrin as it implies Index treats her like a bandit. Index points out that Touma said that there is a "scary system that lets bad girls take your money if you make eye contact", infuriating Mikoto. Index then states that anyone that acts all violent and zappy in back alleys has to be a bad girl. Hearing this, Kuroko tries has a suspicious look on Mikoto, much to her chagrin.

Suddenly a truck passes by carrying ingredients for restaurants. It went by fast, and its draft blew the skirts of Mikoto and Kuroko upwards, while Index can only look in silence. Seeing this, Index holds out her envelope of money to them, to pay for looking up their skirts, to which Mikoto questions and rejects. Index replies that Touma said that one can pay people to make up for problems, annoying Mikoto even more.

After Mikoto and Kuroko declined the money Index goes off on her own, commenting on how Academy City is like a labyrinth. She is then joined by Hyouka, who has appeared before her. She asks what she is going to give Touma, to which Index has shown that she has not researched what exactly she wants to give, only that it will make him "happy". She later chooses taiyaki, though Hyouka prevents her from doing so, saying that she shouldn't confuse her own desires for another's happiness. As Index chooses another type of food, much to Hyouka's chagrin, their activity is stopped by a high-pitched sound. They discover that a waitress has dropped a bottle and have broken it, leading to a Cleaning robot to clean it up.

Hyouka later leaves and Index is later joined by Maika. Seeing her with the cleaning robot, Index assumes that she is a summoner, to which Maika points out that Index can see the cleaning robots all over the city. Maika then says that Touma wants a steam oven, which confuses Index, leading to Maika to explain it to Index. Hearing this, she asks Maika to lead her to where she can buy it. After ordering it, Maika then has it to be delivered to Touma's dorm address as Index didn't know it. Index is satisfied with her purchase and hopes Touma will like it.

As she tries to go home, Index however strays into a gloomy open space after entering a back alley. She then speaks of Bastet, the ancient Egyptian goddess, a being with a woman's body and a cat's head. She has apparently sensed someone, and orders someone to come out. The person reveals herself to be a woman who wanted to steal Sphynx. She reveals that she wanted to read Index's mind using Sphynx as cats carry the words of the gods in Egyptian mythology, and blames Index for naming her cat based on the Sphynx.

After determining what she wants, being her 103,000 grimoires, Index asks why she wants to put together a new grimoire in her head. Hearing that Index has already figured out her motive, the girl is shocked.

Index says that earlier she noticed the truck that passed her and Mikoto by had a description of the Nile incorporated into it. This was the reason why Index offered Mikoto and Kuroko as she realized that they might have been involved in some kind of magical issue.

Then, she says that when she was in the taiyaki stand, the bottle that was broken had some hieroglyphs written in faint ink. This is why she called Academy City a labyrinth as seeing the hieroglyphics reminded her of Egypt.

Then, Index says that when she was with Maika she noticed a balloon popping, which had something written in it. When she imagined that the remaining pieces expanded and combined into the inflated balloon, she could picture the true string of writing. This is why she mentioned summoner to, as she had seen hieroglyphics there and had brought a related term to her mind.

Facing the cat priestess, Index concludes that she used the story of cats stealing information and place fragments of text around so Index wouldn't notice. In this manner, she can put together a book in her head and then steal it from her mind without her ever noticing. She then asks what the reason is for going through the trouble as breaking down the information and alter it into countless hints one would need the original grimoire, meaning there is no need to reconstruct it.

Hearing this, the girl is impressed by Index, the grimoire library. She then asks if Index already knew what grimoire she wanted to reconstruct in Index's head, leading to Index to say that she is rebuilding the Book of the Dead. With a fierce smile, the girl says she only needed to know if the grimoire had been properly put together in head, as using Sphynx failed, she'll have to use other methods. She then says that Index isn't totally correct as she is not a priestess of Bastet but that of Sekhmet, the goddess of shed blood and slaughter, who is symbolized by the lioness and is sometimes seen as identical to Bastet, goddess of fertility and production.

Then, claws appear from her from bloody fingertips, the priestess becomes entranced to awaken a mindset that is similar to that of Sekhmet, a goddess with a concentrated extraction of all the most frightening aspects of woman. Here, she gains strength of a lion, partially transforming her physical body, which allows her to wield claws and fangs. As she laughs in a trance, she claws on her chest, drawing her blood, fulfilling her role as a servant of Sekhmet. Using this power of hers, she charges toward Index. As she swings her arm toward her, Index moved her lips, making Sekhmet think she had heard Index speak. It is actually a technique to allow a magician to perform high speed incantations. Index has transmitted her thoughts to the girl through the movement of her lips.

Index merely surprised the girl, but this surprise allowed Index to confuse her. And as her body acted in high-speed, and hesitation to her actions can become dangerous. Thus, the girl falls terribly, and screams in pain afterwards. Index looks down upon the faller girl and says that she is not the priestess of Sekhmet, hence the reason why she must be Bastet, goddess of fertility and production, a cat goddess not a lion goddess, as she used cats to steal information in her original plan. Index says that Sekhmet is in her head, as the girl constructed the Book of the Dead there, a grimoire that is custom-made for each person who dies. The girl tries to tell Index to be quiet but Index presses on, asking why she wanted to read the deeds and sins of the dead person named Sekhmet.

The girl mentions diagrams, and says she had the priestess of Sekhmet's Book of the Dead, though it was incomplete as they were missing on account of grave robbers. Hearing this, Index understands that she sought for the lost illustrations and diagrams, things that are difficult when transmitting grimoires. Regardless, the priestess promise to reach Sekhmet, and truly understand her.

Index returns to Touma's dorm, saying that she is hungry. Touma however doesn't know of what adventure Index went through the day as he asks if she had a good day. Index says that Touma is about to have a good day, as his "steam" is about to arrive, referring to her steam oven, confusing Touma. Thus ends Index's mad day out. 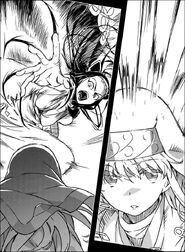 Add a photo to this gallery
Retrieved from "https://toarumajutsunoindex.fandom.com/wiki/Shinyaku_Toaru_Majutsu_no_Index_SS?oldid=285903"
Community content is available under CC-BY-SA unless otherwise noted.