With the New Testament over, the curtain is raised on the Genesis Testament! Even at Christmas, Kamijou Touma's suffering continues――?

Science and magic exist side by side in this world. Christmas approaches in Academy City, peak of the science side. While Kamijou Touma works on his makeup schoolwork as usual, he runs into Misaka Mikoto who has been taken in by the Christmas Eve atmosphere――!?

Continuing from New Testament, the curtains are raised on the new story!!

The fight with the Church of England has come to an end, and the stage returns to Academy City. Everyone's returned to the daily lives that Kamijou, Index, and Mikoto have taken back. However, peace doesn't last long, as once again new trouble visits Academy City...!?

Beyond the New Testament, a new age is created! The curtain is raised on the Genesis Testament!!

Science and magic exist side by side in this world.

This is the peak of the science side with a curriculum for espers, Academy City. In this city where 80% of the population are students, the season has finally come when all residents are excited and fidgety!

Amidst the city showing a cheerful hustle and bustle, ordinary boy who can’t keep up with school, Kamijou Touma, also doesn’t intend to miss this event! He was hard at work in his supplementary lessons...

A backward glance from the default misfortune-prone bastard, the silver-haired sister freeloading in his dormitory, Index, in the heart pounding scene different from the usual, activates a new glutton skill!? While Kamijou tries to desperately stop that, Misaka Mikoto taken in by the Christmas Eve atmosphere appears before him. The Genesis Testament begins bustling! 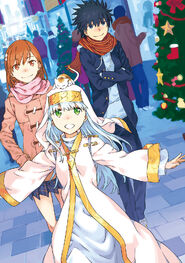