Official cause is space debris, but in actuality is a sabotage.
Spaceplane Orion (スペースプレーン・オリオン号, Supēsupurēn Orion-gō?) was a spaceplane that was manufactured by Orbit Portal Company through Academy City. It was a passenger spaceplane that needed no launching facilities requiring rockets, it was the first of its kind for Orbit Portal Company as well as for space flight, though was caught in an accident that would later be called the Miracle 88.

Orion is the name of a hunter (and the constellation named after him) who, according to Greek mythology, was the greatest hunter in the history of the world. Orion is most notable for being the only man the goddess Artemis ever loved. This didn't go down well with her twin brother Apollo, so he had him killed.

The spaceplane being named after him is probably a reference to the space related concepts present in the myth: Orion becoming a constellation, Artemis being the goddess of the moon, and Apollo being a solar deity.

The full specifications of it are unknown, though the length of the spaceplane can be estimated to be around 125-130 meters using the crash trucks surrounding it in the movie as a reference. The fuselage is very spacious, allowing for three throws of double seats to be placed inside of it with considerably wide aisle space between them. There are two very large engines at each wing, as well as on the back. The spaceplane uses a wing configuration similar to that of a cranked arrow style, and by the engines crank up a bit. The spaceplane, has a V-tail configuration for their stabilizers. The cockpit is technologically advanced, having touchscreen capability.

The spaceplane is apparently powerful enough to escape the earth's atmosphere without the need for a launching sites, and can safely re-enter and land back on earth.[1]

A spaceplane requires a propulsion device that can match the varying atmospheric properties as altitude changes and the lack of aerodynamic effects outside the atmosphere. Academy City's advanced technology gathered all of those abilities together and developed them to a practical level. It became possible to travel between the earth and space without the launching facilities required with rockets. The Orbit Portal Company called this the realization of the space trip everyone had dreamed of.[1]

Three years prior to the current year of the timeline, the first test flight of Orion took place. Officially, there eighty-eight passengers and crew boarded for the flight, and a novelty souvenir bracelet was handed out to commemorate the event.[1] Shutaura Sequenzia was a passenger of the plane, while her father, Daedalus Sequenzia was the pilot. Ladylee Tangleroad was most likely on-board of the plane as well, believing that she could die there as it was not bound by earth's ley lines and directions.[2]

The Orion incident (オリオン号事件, Orion Gōjiken?) refers to the accident that occurred on Orion, though it is in actuality a deliberate sabotage by Ladylee Tangleroad in another of her attempts to kill herself. As the spaceplane was in space, Ladylee apparently did something to the left wing engine of the spaceplane. The left wing engine catches fire and later explodes, taking a small portion of the wing with it. Losing control, Daedalus Sequenzia and his co-pilot struggle with the spaceplane. Eventually, despair overtook his co-pilot and he runs from the cockpit. And thus, Shutaura Sequenzia made her "wish" there to have a miracle. According to Aleister Crowley Shutaura Sequenzia's "wish" for a miracle to happen on that plane, the Orion Spaceplane, changed her perception, which coincided with everyone else's wishes to be safe, inducing a distortion powerful enough to interfere with the laws of causality.[3]

It is unknown how exactly the events took place after the co-pilot fled in despair. What is known is that Daedalus Sequenzia, did not give up on the plane as it re-entered the atmosphere. Most likely, he attempted to land Orion on Academy City's School District 23. The miracle that happened due to Shutaura's "wish" occurred only after the plane re-entered the atmosphere. It is unknown if the miracle allowed Daedalus a long enough time to make an emergency landing on School District 23, or it was Daedalus' efforts on saving the plane that gave Shutaura's "wish" for a miracle enough time to occur. The latter is backed up by Kamijou Touma's speech to Shutaura, referencing on how it was his father that allowed for the miracle to happen.[3]

Regardless, and as if a toll for the miracle, Daedalus died a bloody death, but the spaceplane made a successful landing on School District 23. The Orion's landing was a rough one, costing it both its wings in the process (though in the manga adaptation the right wing stays intact),[4] and there was also damage to the cockpit and passenger seating of the plane.[1] Moreover, fire erupted from the crash, prompting Academy City to quell its flames. After the landing, Meigo Arisa appears inside the plane naked and singing, carrying half of the Orion novelty bracelet Shutaura had.[3]

The accident nearly bankrupted the Orbit Portal Company as they bet everything they had on the Orion, despite this, Ladylee later bought it out immediately, allowing it to make a comeback,[3] though the company permanently left the spaceflight industry.[1] Moreover, the event froze Academy City's spaceplane program,[1] though it may have later restarted as exemplified by the fact the Ballistic Slider was manufactured.

Of Ladylee's set-up, the crashing of Orion supposed to have left no survivors, however, upon discovering Arisa's existence, molded her plans around her, intending to use her as a means to finally end her life.[3]

The Miracle of 88 or Miracle 88 (88の奇蹟, 88 no Kiseki?) is a term used to refer to the incident after early reports suggested that all 88 passengers and crew of the spaceplane miraculously survived. It is because of this that Ladylee hid the truth behind the incident, most likely to allow Orbit Portal Company to make use of it as she has stated that the company did crash because of the "miracle".[3]

Orbit Portal Company later had a monument built on the crash landing site to commemorate the miracle and its survivors.

As the plane's fires were being quelled and the survivors were being pulled out, early reports stated that the spaceplane's portside engine block was hit by space debris during its return flight to earth.[3] Later, when the passengers were counted, the investigation realized that there were 89 passengers, and one of them, Daedalus the pilot, was dead. Ladylee used her influence to hide the truth regarding the cause of the incident and as well as the list of passengers,[1] after the world has come to celebrate the Miracle 88.[3] 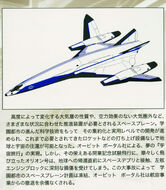 The Orion Spaceplane as seen in the Blu ray and DVD booklet.