St. George (聖ジョージ, Sei Jōji?) is a Saint, the patron saint of England.

There was once a small town at a certain place.
A small town surrounded by walls, the king and his people lived in that city.
One day, a dragon came to town from the vicinity.
The king and the people intended to defeat the dragon together, but failed.
The violent, angry dragon spat fire, raging in the city.
The king and the people, to appease the dragon, brought two sheep every day.
However, the number of sheep was limited.
When the sheep weren't enough, the people sent a sheep and a child.
The children began to disappear from the city.
Finally was the turn to offer the king's daughter, the princess.
The king pleaded to the people to let the princess go.
The people didn't agree because they had already sent their own children.
Thus, the sheep and the princess were sent to the home of the dragon.
The princess grieved for her own fate.
At this time, a wandering knight rode to her side on a horse.
He wielded a holy sword along with a lance, and was a Knight among the Knights.
His name, supposedly, was St. George. 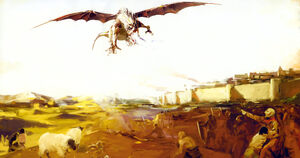 The Dragon of Saint George 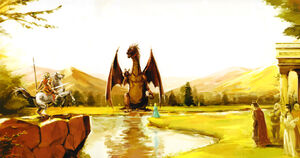 Arrival of the knight
Add a photo to this gallery

The symbol of St. George, used as the flag of England and a component of the Union Jack, consists of a red cross over a white background.

Tatemiya Saiji wears an over-sized shirt with a slanted St. George's Cross emblazoned upon it - according to Kanzaki Kaori he originally wore it to signify that he wanted to join with Anglican Church to follow the Priestess.[1]

Magic based on the legend of St. GeorgeEdit

Retrieved from "https://toarumajutsunoindex.fandom.com/wiki/St._George?oldid=203365"
Community content is available under CC-BY-SA unless otherwise noted.