"This is a spiritual item created from an analysis of that story. It is the steel glove. It is much more convenient for a girl to use."
―Bayloupe[src]

Steel Gloves (鋼の手袋, Kou no tebukuro?) is a pole arm-like spiritual item that is used exclusively by member of New Light that replicates the other powers of the Norse God, Thor.[1]

Bayloupe claims that it is an amalgamation of three legendary items associated with the Norse Mythology, the belt known as Megingjörð, the iron club/staff known as Gríðarvölr, and finally the iron gloves known as Járngreipr.[1] However due to the usage of the Steel Glove in the story, the latter item is likely where the concept of the Steel Gloves comes from.

The shaft of the Steel Glove is 1.5 meters long, and is collapsible, meaning it is made so that it had a narrow portion of the shaft that would allow it to be packed inside a thicker portion for portability. Three 40 cm blades are mounted at the top with another blade fixed lower than the rest. This spear has a lever similar to a car break on its lower portion, allowing its user to open and close the blades.[2]

Bayloupe explains that the Steel Glove are a combination of the other items that Thor of Norse Mythology had in his possession. This is because creating a spiritual item based on Thor's Mjölnir would be hard for them to utilized as it was too heavy to use. Thus the Steel Gloves came into fruition as it was a convenient weapon that a girl can use.[1]

This weapon made use of the legends that were beyond Thor being a thunder god, mainly, they utilized the idea that Thor was also a god of agriculture that rules over the blessings of nature with weather-controlling powers, which lightning as one of its aspects. Despite this, Mjölnir was too strongly associated with Thor, and as such New Light made a spiritual item that wasn't just used for attacking but also represented the softer side of the god of agriculture.[1]

The Steel Gloves was made from the analysis from a story regarding Thor and a female giant (Gríðr), representing the three items that the giant gave to him[1] Each of aspect those items are represented in the Steel Glove: the belt that increase his arm strength, the iron club with exceedingly powerful destructive force, and the iron gloves. The iron gloves had no known use in the story, and as such allowed New Light to interpret it as an interface to control the very powerful spiritual items.[1]

Despite its simple look, the Steel Glove is a powerful weapon. It can be used as pole arm with a very powerful piercing power, able to pierce through the metal of a car.[2] Also, in conjunction with the symbolic representation of Thor's belt incorporated into the Steel Gloves, increases the arm strength of its user, making it dangerous to even get hit by it.[1]

However, its primary usage is for the four blades or claws of the Steel Glove is to "grab" things. Apparently, any object can be grabbed, from large solid objects,[1] to miniscule things such as dust,[1] to even things such as fire.[2] From there, the user can either swing what it grabbed around[2] or throw it at the opponent.[1] Bayloupe also displayed an attack using dust to create an explosion after being "grabbed" by the Steel Glove,[1] a result of its symbolic representation of the iron club that has exceedingly powerful destructive force.

Finally, Bayloupe demonstrates that the Steel Glove was capable as means of transportation when she attempted to escape from the Amakusas. The bladed tips of the gloves extend to the ground then the rider straddles the glove like a witch’s broomstick and moves equally as a car on the highway.[1] 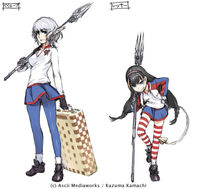 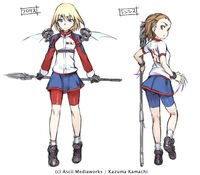 Floris and Lancis with the Steel Glove.