The Sword Sanctuary (ソード聖堂, Sōdo Seidō?) is a Necessarius facility, involved in caring, storing, customizing, and retuning of powerful and dangerous spiritual items.[1]

From the outside, the Sword Sanctuary appears to be a stone building which doesn't seem to be particularly valuable. Most of the actual facility is spread out underground.[2]

The Sword Sanctuary apparently has at least two bell towers, one of which can be used in a large-scale spell for attacking enemies.[3]

The Sword Sanctuary is a customizing facility that would re-tune spiritual items that were powerful but held risk of harming or killing their user.[1] There is a religious explanation on why the Sword Sanctuary is allowed to keep and care for in spite of the supposed heretical nature of worshipping objects. This is because the facility allows the masses to vent their dissatisfaction of these holy objects from being forced away from them as they see great significance for them.[1]

The facility has an above-ground portion and an underground portion. All of the known rooms of the facility are in the underground portion, and though despite there being signs for convenience, it is described as "expanding chaotically like an ant colony".[2] As the facility is specialized in dealing with spiritual items it had few facilities for people.[1] One of which is a morgue, which was used to analyze corpses with horrible wounds to determine what spiritual item had caused the damage. The information gathered from this analysis would then be used to help further their research.[1]

The facility has another room where it stores old newspaper articles, reports, and other documents related to magic side incidents Necessarius has been involved in. The room is large, about the size of a tennis court, with uneven walls and ceilings, which implies that the room is expanded haphazardly as the amount of files and bookshelves for them increased in the room.[2] Because of the large amount of files stored in the room, a computer is kept in there to aid the user in finding where the articles are located in the room and in which shelf - an unusual sight due to the stigma of magicians on science and technology.[2]

This section refers to the spiritual item. For the summoned creature, see Brísingamen.

Hrungnir (フルングニル, Furunguniru?), based on the giant of the same name from Norse Mythology, is a spiritual item that is boasted by the Sword Sanctuary's customization worker to be able to break down any barrier in a single blow. The spiritual item is in a form of a massive stone club. Because of how massive it is it is placed atop on a cart.[4]

When used the club explodes into pieces, destroying the door it is pressed against. The magic of the spiritual item is based from the legend of Hrungnir. In the legend, Hrungnir was defeated by Thor in a single blow, though at the cost of Hrungnir's weapon smashing into fragments and one of which stabbed Thor's forehead. The stone club is an application of that legend, the spiritual item purposefully "lost" so that it would apply definite damage to the "victor". It did not matter how strong or hard the target is as its "final attack" could destroy almost any door because it itself was fragile.[4]

The spiritual item is in the form of western armor, and is based on the official armor worn by knights. However, even the Knights of England had deemed it to be too dangerous for use as standard equipment.[5] In the illustration, there is a rib-cage like protrusion that comes from the back and seems like a tail.

According to the Sword Sanctuary customization worker, wearers usually passed magic power into their armor to greatly increase their mobility, however, he states that the prototype armor is based on the exact opposite concept, as it doubles the wearer's magic power to its absolute limit. However, as magic power is the energy obtained by converting one's life force, the armor messes with the magic power directly, holding the risk of interfering with the user's life force too. Because of the danger the armor offers, the customization worker later modifies it to lessen the risk of losing control.[5]

Itsuwa's analysis compares the armor to that of Freadia's crystal radio that uses a cursed jewel, though says the density is different, making her unable to add in defensive magical symbols. According to Itsuwa, It connects to the wearer and interferes with the route of their life force as it circulates through their body through the blood vessels, creating a new path and sending it from the body into the armor and back into the body, enabling a method of converting life force impossible with a single body. In sending the life force through the armor, it creates the illusion that one has a special constitution, making the wearer forget they are still themselves - the absolute limit to how much life force can be converted remains the same and the user will still die if it is all converted. By falsifying the number, the wearer can convert large amounts of life force into Magic, bringing them into the danger area while deceiving themselves. However, once that deception can no longer be maintained, the wearer would immediately perish from exhausting their life force.[6] Indeed, even after taking off the armor Freadia was exhausted from wearing it as she was pale and sweating profusely.[7]

The armor is able to create blackish-purple smoke compressed into claws that extended from the fingers of the gauntlet and can measure over a meter and even ten times that. When the claws are near its target it exerts tremendous pressure it is able to weaken them, and can be described as "strength leaving the core of the body". The claws can burst back into smoke and when it hits the target, it can induce great pain and can cause internal bleeding.[6]

During the incident surrounding the Amakusas' admission test, Itsuwa infiltrated the Sword Sanctuary in order to determine the identity of their enemy and their objective.[1][2][4] Freadia Strikers later used a prototype surgical armor from the facility to apprehend the Amakusas and the remainder of the Dusk Waiting to Awaken at Stonehenge.[5][6] 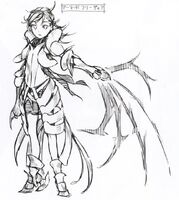