Otohime's surname means "Dragon God or King" and her first name means "youngest princess". Considering that her cousin, Touma, has a connection with the dragon, her name has sparked some discussion among curious fans.

Tatsugami is a brunette, though much lighter, which resembles more of a shade of purple, than Touma's that she keeps trimmed short. She also has green eyes. Tatsugami is a young girl, as such, her body structure is petite.

Her personality is playful and enjoys acting childish. She has stated that hugging Touma, clinging to Touma or flirting with him (in public or private) is completely okay.[1] She prefers to calls Touma Onii-chan. Kamijou Shiina mentioned that they were pretty close and that they shared a bed on an afternoon nap once.[2]

Touma described her behavior as that of a "little sister type" character.

In the original light novel, she arrives at the Wadatsumi in the morning of Angel Fall, confusing Touma as she was not there the day before, as well as the obvious fact that her appearance has changed to that of Misaka Mikoto, a fact that greatly disturbed Touma in more than one opportunity. This makes Touma think that the entire family is setting up a prank on him.[2]

In the anime adaptation, Otohime and Touma attended the last New Year's celebration, which she has saved on her mobile phone. This would later help Touma to confirm that she is not playing a prank, and that she is unaware that she is in the form of Mikoto.[3]

She appears in the form of Misaka Mikoto, and because she is very clingy this makes Touma extremely uncomfortable.

In the original light novel, she appears in the morning of the first day of Angel Fall, and because Touma has lost his memories, he cannot recall that he has a cousin. It is not until Shiina points out that she arrived in the morning that Touma stops questioning her about being his cousin, of course, he still does not like hanging out with her since she has the form of Mikoto.

In the anime adaptation, she the second family member to appear before Touma, which completely surprises him, what's more when he discovers that Shiina has the appearance of Index. After Touma goes into town to investigate the strange events happening around him, Otohime arrives before him and finally shows Touma that there is indeed something weird going on with the world, showing him a picture of her and Touma of the last New Year's Festival. Touma sees that Otohime's form is not the same as in the picture, and that she appears to have no recollection or awareness of the apparent difference.[3]

In both novel and anime, Motoharu later drugs her along with her aunt in order to not get them involved in the ruckus that was going to unfold in the beach house. Otohime is not seen since, though it is presumed that she is all right.[4]

Appearing in 4th light novel, Otohime did not get a design up until her slated appearance in the Toaru Majutsu no Index anime adaptation. Since she would appear only once, Haimura made her design simple. 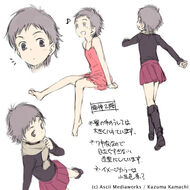 Otohime's design as a bonus for the 17 and 18th volume designs by Haimura Kiyotaka.