Barcelonan and Barcelonian both in dictionary, latter has red underlining:[9][10]

Voodoo is described as not actually having fixed teachings or spells,[17] being a culture that draws in other cultures,[18] borrowing gods and ceremonies from other mythologies and religions, and adding to them while making them its own to continually expand.[17] Isabella Theism, a necromancer who uses a mix of Voodoo and Christianity, has highlighted the affinity and called Voodoo a greedy religion that takes in every last miracle it comes across.[6]

Voodoo is known for having many curses.[19][17] The Ceremony of Ba Moun is considered the worst and most wicked spell in Voodoo and its most horrific curse,[19][17] where a magician makes a contract with a demon which will grant them their every wish in exchange for the magician annually sacrificing someone they care for, being devoured by the demon if they fail to carry out the sacrifice.[20][19][17]

As well as curses, Voodoo has a variety of drugs and concoctions,[7](Other Ref?) from wound-healing paste mixed from different vegetables and meat,[7] to a deadly poison created from a single lime growing on a tree.[17][7] One of the most notable is zombie powder, which is used in the creation of zombies - one of the most well-known specialities associated with Voodoo.[21][19][6][7] Rather than making corpses rise from the dead,[19][6][7][Non-Agnese SS ref] as is often thought of with zombies,[19][Non-Agnese SS ref] chemicals are used to intentionally harm the body and remove the Ti Bon Ange from the five components of the soul,[6] putting a person into a state of pseudo-death, robbing them of their mind and remaking them into a living unit which can be controlled.[6][7]

The Ceremony of Ba Moun (バ・ムーンの儀式, Ba Mūn no Gishiki?) is a Voodoo ceremony which involves a contract with a demon. Described as the worst and most wicked spell in Voodoo, the demon grants the caster's wishes, but in return they must annually sacrifice someone they care for, otherwise they will be devoured by the demon.[20][19][22][17][6][7] 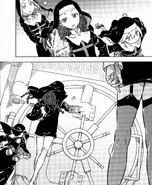 Chapter 4
Add a photo to this gallery

Add a photo to this gallery

Retrieved from "https://toarumajutsunoindex.fandom.com/wiki/Template:Shared_Draft_93?oldid=361183"
Community content is available under CC-BY-SA unless otherwise noted.