Toaru Majutsu no Index Wiki
Register
Don't have an account?
Sign In
Advertisement
in: Characters, Science Side Characters, Espers,
and 5 more

Mobile MMO
Therestina Kihara Lifeline (テレスティーナ＝木原＝ライフライン, Teresutīna Kihara Raifurain?)[4] is the main antagonist of the second arc of the Toaru Kagaku no Railgun anime. She is the granddaughter of famous scientist Kihara Gensei and is related to Hound Dog's commander, Kihara Amata. Like her grandfather, she is obsessed with achieving the creation of a Level 6 Esper.

Therestina is a woman with wavy orange hair which is most of the time gathered into a ponytail. She is shown to have glamorous proportions and is "well-endowed" as well. She also wears a pair of glasses.

In her office attire, she wears a dark-colored coat and a pencil skirt with the same colors. Light brown stockings and white high-heeled shoes complete her outfit.

At first glance, she seems to exude an air of elegance and authority and is also easily approachable and friendly. She also seems to be childish somewhat, having many toys decorated in her office and is fond of a specific kind of candy that comes out of small cylindrical tube where she easily guesses what color it is.

This is all a facade for her true nature: she is truly cold and uncaring of people using them as pawns for the goals at hand, she is also well prepared in situations having installed Capacity Down in a research facility in the event of espers attacking (such as Misaka Mikoto and company) as well as determining the weakness of Mikoto's Railgun. However, she is somewhat boastful of her own abilities and highly unstable, often breaking down in hysterical laughter while parading her plans when things go her way.

When she was younger she was used by her grandfather for the creation of the Crystallized Esper Essence, stating happily that she was going to become Academy City's "dream" which is the achievement of creating a Level 6 and that she was being used a foundation for it. Apparently, she was previously an esper as she used as a part of the experiment, it is unknown if the experiment rendered her powerless, or that she lost her esper abilities in a much later point in her life.

She eventually became a leader of Multi Active Rescue, a disaster management organization in Academy City which acts as a response team in high-risk situations. Despite being a high-ranking official in MAR, she is shown to have an interest in childish things, like her occasional consumption of candies and her collection of objects which are favorable for children. Sometime before the events of the Big Spider Arc, she gives Big Spider the Capacity Down that she developed, as a means to gather data from its use against espers.

She was first seen as an unnamed character commanding a small group of MAR units after the capture of Kiyama_Harumi, clearing debris from the nuclear research facility that the AIM Burst nearly destroyed.

Later she aides Anti-Skill and Judgment with the Poltergeist incidents that were happening around the city with her MAR units under her command. She saves Haruue Erii and Uiharu Kazari during one such incident and gains the trust of Misaka Mikoto and company. She further gains their trust, after saving them once again during another poltergeist incident in Nature Park; she also takes Haruue Erii into their custody, under the facade of observing her.

When Kiyama Harumi and her students were discovered, she takes custody of the children from her. Later when Kiyama Harumi and Kazari offered to give the former's research data on recovering her comatose students, she reveals her true color, and that she is discovered that she is actually the granddaughter of Kihara Gensei, the one responsible for the coma of Harumi's students and that she wants to continue the experiments by using the children regardless of the consequences.

She is defeated by Mikoto and her friends with the support of Anti-Skill and was reported to have been captured for questioning though she seems uncooperative in the interrogation.

Therestina Kihara Lifeline is in a prison cell when Mikoto comes to visit her through the influence of Heaven Canceller. Ever a difficult person to deal with, Therestina constantly mocks and belittles Mikoto, and even more so when she hears her asking for her help as she is familiar with the dark side. Therestina asks if she despises the city after discovering the truth within it, to which Mikoto says she doesn't because she has met good people in the city as well, which annoys Therestina. After much whining from Mikoto, Therestina finally acquiesces to Mikoto asking about artificial humans, telling her of Chemicaloids she used to hear of. She then says that those who have created the Chemicaloids are planning to show it to the city in an upcoming event, which Mikoto discovers is the Academy City Research Exhibition Assembly. Therestina, however, warns her that even though she can easily use the fact that she is a Level 5, a valuable guinea pig to the City, she knows not how deep the darkness of those who are not even considered guinea pigs.[5]

Therestina and the events of the Poltergeist Arc are indirectly referenced by Mugino Shizuri when talking about the effect of the Ability Body Crystal, as she uses Therestina, only referred to as "some researcher from something or other Rescue", as an example of someone else who tried to use Esper powers going out of control as a way to reach Level 6.[6]

Therestina is not shown during the Baggage City Arc, but she is mentioned by Kihara Enshuu.[7]

She is an esper, as is the reason why she was first used by her grandfather as a test subject for the Ability Body Crystal's First Sample.[1] Despite being an esper, she is shown to be immune to Capacity Down. Since only Level 0 espers (such as Saten Ruiko) can be immune to the device, Therestina's Level is theorized to be 0. This is supported by the fact that she never once displayed any ability. However it should be noted that her suit could have worked as a shield against the Capacity Down.

The evolution of Therestina's looks started after Haimura decided that Therestina was the complete opposite of Harumi's character, as well as his desire not to fall into set design patterns that are common in moe characters. Therestina's design's first draft looks completely different from her final design. In her second draft, Haimura modified her outfit after learning that Therestina would be piloting Powered Suits, but the overall design was rejected. Haimura later redesigned Therestina, after he was given feedback that Therestina should look more like a secretary. Her current design was later finalized after redrawing a rough sketch of her with orange hair. According to Haimura, despite the stark difference between the final and first design, Therestina still looks as an opposite to Harumi.

Prototype character design by Haimura Kiyotaka. Note the Anti-Skill logo on her chest. 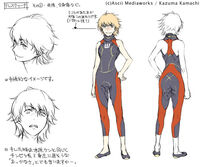 Full body look of the prototype character design by Haimura Kiyotaka, with details. 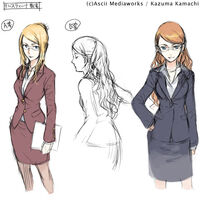 An early design of Therestina with blond hair, as well as a design similar to that of the final product. All by Haimura Kiyotaka. 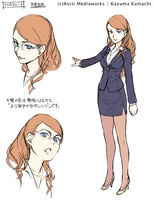 A full body look of the final character design by Haimura Kiyotaka. 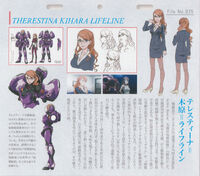 Toaru Kagaku no Railgun anime design as seen in the BD/DVD Booklet.