During a Social Studies field trip to the Central Anti-Skill Station, Saten Ruiko discovers that a person in the background of one of the photos on her smartphone is a criminal on the wanted list. As a result, Saten, Uiharu, Mikoto and Kuroko find themselves involved in the Cold Sleep Murder Case. 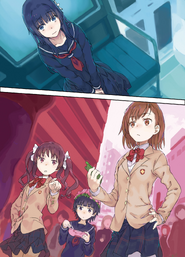