Toaru Majutsu no Index Wiki
Register
Don't have an account?
Sign In
Advertisement
in: Articles to be expanded, Episodes, Toaru Kagaku no Railgun Episodes

Part of the Poltergeist Arc

Real Force
"Midsummer Festival" (盛夏祭, Seikasai?) is the nineteenth episode of the Toaru Kagaku no Railgun anime series. It was first aired on February 13th 2010.

Mikoto's nervousness can't be contained when morning came. Even Kuroko, who anticipates that day, is able to notice her anxiety.

The main reason for her nervousness was because it was Tokiwadai's Midsummer Festival, where the two dormitories of Tokiwadai Middle School open its doors to visitors as part of their yearly festivities.

The day starts with Mikoto and the rest of the boarders of Tokiwadai dormitory acting as usherettes, giving the booklet which guides them around the exhibits and activities inside. Everyone sans the Dormitory Manager wear maid costumes to tie in with their duties, and this was something Kuroko didn't let pass.

Mikoto receives a visit from friends Saten Ruiko and Uiharu Kazari, who are also interested to enter the dormitory of one of the most prestigious schools in Academy City. Uiharu declares that she enters an "limits-off" mode, where she becomes more energetic; she admits that going inside Tokiwadai's dormitory is an opportunity she can't afford to waste.

With the Electromaster to guide them around the dormitory, they visited the confectionary and ikebana exhibits and participated in embroidery. Later, they went to the cafeteria area and dined in the buffet prepared by the students. 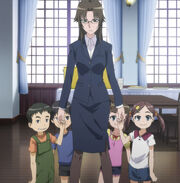 As she takes some rest of her own, Mikoto also receives a visit from the children she met at Asunaro Park who were accompanied by the Dormitory Manager herself. The manager expresses her anticipation in watching her upcoming performance later, followed by one child expressing her anticipation in a louder voice, causing everyone to find out about it. It left Mikoto somewhat pressured. Tsuchimikado Maika also appears as the person-in-charge for catering; she also greets Mikoto for her performance and tells her that a certain girl dressed in a nun's costume was eating so much food than they could maintain.

Uiharu and Saten went to do some more rounds inside the dormitory when Mikoto decides to return to her room; as she leaves, the two notice a commotion outside. When they checked, they find out that it was an auction event organized by Tokiwadai's students. A number of items were auctioned: a set of expensive signature bags and a Kirugamar stationery set were bought by Konori Mii and Shirai Kuroko respectively. Konori was noticed by Saten and Uiharu and tries to keep her being spendthrift from them; unfortunately, it failed. On the other hand, Kuroko was proud at getting the stationery set as she knew that it was donated by Mikoto herself, who was a fan of Kirugamar merchandise before becoming a Gekota fan.

Kongou Mitsuko also appears, much to Kuroko's annoyance, wearing a "genuinely Japanese England-made" maid costume, which is reminiscent of the costume of a shrine maiden, though it resembles the costume of Touhou character Reimu Hakurei more. She and Kuroko exchange taunts at each other about being a good maid until she leaves, still keeping the maid act, much to Kuroko's amusement.

Meanwhile, Mikoto changes to a long white dress and receives wows from her fellow students; she admits she is very nervous because of the performance. When she goes backstage, a boy resembling Kamijou Touma appears and asks her for directions. Mikoto felt that knowing Touma, he was going to tease her, she threatens him until he runs away. For some unknown reason, Mikoto suddenly felt better as her nervousness subsided.

As the sun settles down, Mikoto performs a violin piece: the instrumental version of Elisa's "Real Force".