The tankobon details the first half of Misaka Mikoto's side of the Sisters Arc, as she discovers that there are clones of her, much to her horror. She later bonds with one, but soon discovers that true nature of the clones' purpose, as she witnesses the horrific death of her clone at the hands of the Accelerator.

Breaking into a new episode! Mikoto has clones called Sisters!?

"Clones of the Railgun live in the city." Mikoto has heard of such urban legends. However, she begins examining the truth behind it despite believing it all to be a hoax. Then one day Mikoto meets one of these Sister clones, and discovers the cruel truth hidden from her...! 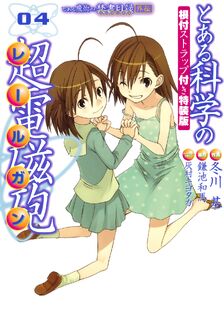 Retrieved from "https://toarumajutsunoindex.fandom.com/wiki/Toaru_Kagaku_no_Railgun_Manga_Volume_04?oldid=243076"
Community content is available under CC-BY-SA unless otherwise noted.