The tankobon details the second half of Mikoto's side of the Sisters Arc, beginning with Mikoto's defeat at the monster known as Accelerator, the strongest Level 5, and subsequent depression. She later determines to attack the facilities related to the experiment, which does not go unnoticed. The rest of the tankobon deals with Mikoto and Shinobu's separate plans to stop the experiment, with both being confronted by ITEM. After defeating Mugino Shizuri, the leader of ITEM and the 4th ranked Level 5, Mikoto ends her rampage. The volume ends just after Mikoto meets Kamijou Touma again.

The curtain rises with Mikoto in a fierce battle.

One after another the Level 5 esper consumes all those who stand in her way. Can Mikoto stop the horrible experiments that play with lives...!? A fierce fight is inevitable in volume 5 with a shocking appearance! 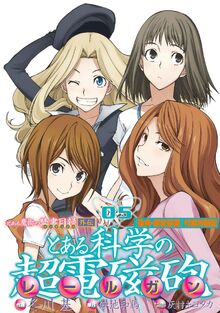 Retrieved from "https://toarumajutsunoindex.fandom.com/wiki/Toaru_Kagaku_no_Railgun_Manga_Volume_05?oldid=241396"
Community content is available under CC-BY-SA unless otherwise noted.