Taking place before the events of the Toaru Kagaku no Railgun manga, the story is set in Russia where Misaka Mikoto takes part in a demonstration on the behalf of Academy City, but things don't pan as scheduled as Mikoto meets the mysterious New Light.

Before the summer break, Misaka Mikoto, a student of Tokiwadai Middle School, was asked by the Academy City for a "demonstration." They wanted to show off the performance of "Academy City's Level 5" in a demonstration format at a huge shopping center in Russia. Mikoto reluctantly agrees to be made a show and heads to Russia, where, let alone a demonstration, strange urban legends are rampant, forcing her to change into a swimsuit in a corner of the street, fighting with a girl named Lessar who has obviously bigger than Mikoto!? The "ability demonstration" is starting...![2] 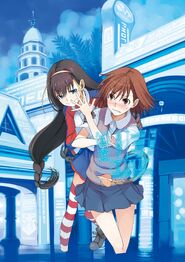