The story is set in Liberal Arts City that takes place in the time period between September 3rd to 10th. Academy City have a exchange program with the rest of the world that allows some students to travel for this week to other places, and some students are allowed into Academy City during this time. Among these students are the third-ranked Level 5 Misaka Mikoto and her friends, Shirai Kuroko, Uiharu Kazari, and Saten Ruiko. However, the floating city ends up having unexpected guests in form of the Return of the Winged One Magic Cabal. 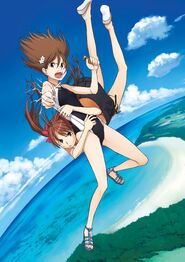