Part of the Poltergeist Arc

sister's noise
"Railgun" (, Chōdenjihō (Rērugan)?, lit. "Super Electromagnetic Cannon") is the first episode of the Toaru Kagaku no Railgun S anime series, the second season of the anime series adaptation of the Toaru Kagaku no Railgun manga series. It was first broadcast on April 13, 2013, and was written by Seishi Minakami and was storyboarded and directed by Nagai Tatsuyuki. The animation was co-directed by Saito Atsushi.[1]

Over 1.8 million students are gathered in Academy City to develop psychic powers. Some delinquent students acting in secret in the back alleys are wiped out by a single line of electric light. There stands Academy City's strongest electric princess, the Railgun Misaka Mikoto! 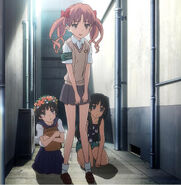 Uiharu and Saten behind Kuroko, as she sees something rather predictable.

It is a warm day in Academy City, and Misaka Mikoto waits for someone at a nearby pedestrian overpass while using her phone. As she decides to head off elsewhere, her friend, Saten Ruiko finds herself in trouble as a group of thugs pursue her. Saten tells her close friend Uiharu Kazari by phone that those thugs are trying to hit on her, and is currently being chased into an narrow alley. Fortunately, Uiharu manages to track the location of her phone and uses this to lead Kuroko into Saten's location.

Kuroko teleports herself and Uiharu into Saten's location just as the thugs catch up with her and quickly shows her Judgment armband to show her authority. The thugs doesn't seem intimidated by two Judgment operatives, though. Suddenly, a face familiar to Kuroko appears, and as she loses her works at her presence, Kuroko watches as the thugs who now focus their attention to this girl, the Level 5 Electromaster Misaka Mikoto, lie flat on the ground as they receive a powerful shock from the Level 5's abilities.

Mikoto, ignoring the mess she just made, Mikoto asks Kuroko about their escapade for the day.

The next day, Kuroko proceeds to scold Mikoto about what she did the day after that incident, but Kuroko sighs in disappointment as Mikoto seemingly ignored her sermon on her responsibilities as a Level 5. Meanwhile, the incident continues to be a topic for Saten, who tells her friends Uiharu and Haruue Erii how she was rescued by Mikoto the day before. Erii is amazed by the story, but Uiharu scolds her about getting into trouble because of her habit of entering dark alleyways. Saten proceeds to evading the topic, much to Uiharu's irritation.

Soon, Erii wonders about why they are in a bus to the School Garden. It turns out that Uiharu and Saten have plans for the day.

Inside Tokiwadai Middle School's vast library, Mikoto meets Kongou Mitsuko with her possé, Awatsuki Maaya and Wannai Kinuho, getting some references for the vast amount of homework they have to handle during summer vacation. Mikoto, on the other hand, is simply killing some time before her friends arrive at the School Garden as she has already done hers. Kongou is shocked at this discovery and tries to cover her embarrassment, to no avail.

Soon, Mikoto notices a girl with golden-blond hair surrounded by her schoolmates — the Queen of Tokiwadai, Shokuhou Misaki, a fellow Level 5, surrounded by members of her clique. Kongou slips her tongue when she talks about how she cannot find herself to like her, and decides to make a hasty exit before she embarrasses herself even more.

Mikoto is alone, but not for long, as Misaki comes to tease her a bit. Mikoto clearly shows her disinterest in talking to her, but she is eventually provoked into reacting harshly against her. Soon, Misaki pulls out a remote from her bag and presses a button. Mikoto feels her electric barrier go off, and Misaki sarcastically voices out her disappointment that her ability cannot break through Mikoto's electricity. Mikoto is driven into rage in this provoking act, but all it took for Misaki to neutralize her is to use her mind control abilities as the Level 5 Mental Out on everyone else inside the library, wondering about the odds of Mikoto winning with many espers fighting against her.

Misaki soon leaves after lifting her control over the students of Tokiwadai, but not until she answered Mikoto's question about the credibility of the fact that Misaki is a middle school student.

Mikoto still feels tense after the encounter with Misaki, but this eventually subsided when she is taken by Kuroko to Saten and the others, who are outside waiting for her.

As the topic between Saten, Uiharu and Erii shifted from cakes to the rose-scented atmosphere to rose-patterned panties by Uiharu, Mikoto decides to lead on the girls to their next destination.

The girls first visit a certain hospital, where Erii's friend Edasaki Banri is still recovering. Inside, they meet Yomikawa Aiho and Tessou Tsuzuri, who watch over a particular Pyrokinesist in his road to recovery. The five girls then proceed to Banri's room, where they enjoy the cakes they bought earlier. As Uiharu enjoys her piece of heaven, Banri tell about her improving conditions to the girls.

Seeing that Erii and Banri needed their private time together, Mikoto decides to leave, bringing along Uiharu, Saten and Kuroko. In their short walk outside Erii's hospital room, the four watch how the others undergo their rehabilitation sessions, and this triggers a particular memory in Mikoto. For a moment, Mikoto is out of reach of her friends, and it took Kuroko some time before Mikoto abandons the thought.

Mikoto soon suggests that they should give something that is much more memorable than the cakes they had earlier. As Mikoto goes on rambling on what they should get for Banri, Saten, Uiharu and Kuroko could only look on and nod at Mikoto's hot-blooded moment. Mikoto soon thinks of giving out a bouquet of flowers with a gift inside, and soon persuades Kuroko to help her out, much to the three girls' puzzlement.

As Erii and Banri notice that Mikoto's bag is still inside Banri's hospital room, things become intense in the hospital when two thugs manage to infiltrate the hospital and steal the patient that is on high alert by Anti-Skill. The fire alarm tripped by the thugs alert Kuroko and Uiharu, and the two girls quickly switch into Judgment mode, telling Saten and Mikoto to head back to Banri's room for the meantime. Meanwhile, a concerned Erii decides to check up on what is going on outside, only to find herself dragged into the tense situation.

The three thugs, using Erii as a hostage, head to the rooftop, and Tsuzuri and Aiho feel helpless as the risk of a casualty becomes a factor. Meanwhile, evacuations are initiated while Kuroko and Uiharu are briefed on what is going on.

Elsewhere, Saten and a disgruntled Mikoto head back to Banri's room as Kuroko instructed. However, the two quickly discovers what is going on when they find Yomikawa armed with a pistol and a concerned Banri who tells them that Erii hasn't come back. Yomikawa, thinking that she can no longer hide the situation from them, decides to expose the real situation, including Erii being taken hostage.

Mikoto and Saten decide to being Banri back to her bed. Meanwhile, Mikoto dives into action, using her electromagnetism to scale the hospital building.

The three thugs hijack a helicopter and uses it as an escape vehicle, with Erii still on their hands. However, Mikoto manages to pin the helicopter by magnetic force. As the thugs find themselves in a bind, they decide to throw away Erii in an attempt to lose Mikoto. Mikoto tries to catch up to Erii, who is brought by the air currents to a long fall to the ground, but narrowly loses her. Fortunately, Saten manages to catch Erii with enough time for Kuroko to bring her and Saten to safety.

As Uiharu checks up on Erii's condition, Erii finds out that she lost Mikoto's bag inside the helicopter during the ordeal. Kuroko is left with little time to lecture Mikoto as she is forced to pursue the helicopter using her teleportation ability.

Meanwhile, the thugs aboard the helicopter soon remember that there is a Level 5 Electromaster from Tokiwadai Middle School, one whose name is feared as the strongest electric-type esper in Academy City.

The realization comes too late as Mikoto unleashes a railgun right in the path of the helicopter in mid-air, destroying the helicopter's rudders.

A quick teleport by Kuroko afterwards, the threats are all neutralized.

As Saten, Uiharu and Erii comment on how typical of Mikoto to resort to such daredevil acts for her friends, Mikoto takes a short rest at a nearby wind turbine before heading back to Banri and the others.

It turns out that the bag contains their gift for Banri: a uniform for Sakugawa Middle School they ordered the day before. Mikoto proceeds to apologize for having such a simple gift for her, but Banri's thanks is all it takes for Mikoto to quiet down.

Meanwhile, amidst the wreckage of the helicopter which suffered the full brunt of Mikoto's Railgun, a certain unfortunate boy clenches his right fist as he comments on how there is never a single dull moment in Academy City.

The library scene is lifted from the 41st Toaru Kagaku no Railgun manga chapter, otherwise all the content is an anime original.

No new locations were introduced during this episode