Grow Slowly
"Radio Noise Project" (計画, Chōdendōbō Ryōsan (Redio Noizu) Keikaku?, lit. "Railgun Mass Production Plan") is the 3rd episode of the Toaru Kagaku no Railgun S anime series, and the 27th episode of the anime series adaptation of the Toaru Kagaku no Railgun manga series. It was first broadcast on April 26, 2013. The episode's script was written by Minakami Seishi, storyboarded by Nihei Yuuichi, and directed by Sonoda Masahiro.

With her own eyes, she witnesses something that she should never have. There is a rumor going around that a Level 5's DNA map has been used to develop clones for military use. Mikoto meets the mysterious girl, Nunotaba, which raises a certain memory that chills Mikoto's soul.

Mikoto researches information regarding Nunotaba who speaks to her in riddles and acts strangely around her. There, she discovers that Nunotaba is a student of Nagatenjouki, and sneaks in to a certain research facility to connect the dots.

Blue skies and bright days does not hide the suffocation of the coming darkness.

What seems like a routine day for Misaka Mikoto becomes an unnerving experience when she receives word about "someone like her" walking around the streets of Academy City. Rumors about a particular experiment spread around like wildfire, as if following the Level 5 Electromaster. At first, the Railgun simply shrugs off these rumors as ridiculous, however, the mention of her epithet instantly rouses her suspicion.

After her single-handed victory over the Skill-Out who raided her run-down abode, Shinobu reminds Mikoto of the rumors circulating around Academy City nowadays. Mikoto's rather rude manner of speaking irritates the high schooler Shinobu, so she drives the edge of her bag on Mikoto's head and asks her to speak more politely. Mikoto complies at once, so Shinobu decides to tell what Mikoto wants to know about the truth behind the rumors, although Shinobu chooses to make it as brief as possible as she knows that Mikoto would not handle the real situation as a whole.

As she tries to subdue Mikoto's rash personality, Shinobu explains that what she has been trying to do over the past few days — placing envelopes of cash cards throughout the alleyways of Academy City — is to eliminate the blind spots in security, putting human eyes where no mechanical ones could see. According to her, after leaving a particular project, this is the only thing that she can do to avoid the experiments from taking place in those blind spots. However, Shinobu feels responsible for being followed so easily, as she herself holds vital intelligence about the project.

Shinobu soon gets a lighter from her pocket and ignites the documents she picked up from her drawer. Mikoto tries to stop her, but Shinobu mistakes it as suggesting to burning the building along with the vital intelligence she was holding.

Mikoto ends up frantically pulling out the unconscious Skill-Out from the building before taking off with Shinobu. Minutes later, a crowd gathers around the fire that broke out, while Mikoto is forced to sneak out alone.

Mikoto feels irritated that she got herself into a lot of nonsense that night. However, her mind cannot escape from speculating that the DNA map that she gave scientists earlier in her life might have been used to produce clones of herself. She decides to hack into the computers of Nagatenjouki Academy to find out more about Shinobu, and there, she discovers that Shinobu, a gifted mind in the field of biopsychology, has been in Yamashita University Hospital, the same hospital where she gave her DNA map. At that moment, Mikoto realizes that Shinobu may have been telling her the truth, but she may also be the mind behind the project to clone her.

Knowing that Shinobu would not answer her questions directly, so she decides to do some night work on her own.

Meanwhile, Saten decides to show the cash cards that she had looted from her trips around the alleyways of Academy City, but she ends up outclassed by her friend Erii, who acquired a stack of them during her own trips. Uiharu, who just arrived from buying snacks from a nearby grocery, sees a distraught Saten who just lost to an unexpected foe.

The three girls soon enjoy some strawberry oden with riceballs, and Saten notices that Erii has been improving in her cooking skills lately. For some reason, Saten feels like Erii won another round against her. Soon, Uiharu asks Saten about their conversation about Mikoto having someone that looks like her, and Saten simply shrugs it off as a something ordinary.

Soon, ther topic shifts to how students of Tokiwadai are supposed to wear their uniforms even outside school premises, and Saten voices her wishes of seeing Mikoto outside of her uniform.

After fighting off a sudden feel of goosebumps in her skin, Mikoto makes his way past the security systems of the facility, using her powers to disable any machine that comes her way. Mikoto is fortunate that most of the systems in the facility is electronic in nature, although she remains cautious about researchers or guards walking around the building. As Mikoto hacks into the data files of the facility, she discovers that the research done there is irrelevant to what she is looking for, and that there is an entire block of the facility which is completely isolated from the rest of the facility.

Suddenly, Mikoto finds herself dangerously close to being spotted by a patrol guard. Thanks to the indented walls, Mikoto manages to hide from plain sight, and she uses a patroling Guard Robot to lose the guard for good. However, she is forced to jam the signals of the Guard Robot as alarms suddenly went blaring. Mikoto then uses the chance to escape into a nearby stairwell.

For a moment, Mikoto thought of going back home in the current mess of the situation. However, Mikoto is confident that she is not the one who tripped the alarm, so she decides to push forward.

Mikoto soon enters a room and discovers a small room which leads to a slightly bigger one, the latter containing incubation pods large enough to fit a person. Meanwhile, the guard which was startled by the alarm earlier encounters someone who closely resembles Mikoto, although she is welcomed to the facility to delete the data on a frozen project there. After giving the-one-who-closely-resembles-Mikoto her pass, she is led in to a certain place.

Meanwhile, Mikoto is busy hacking into the systems of the facility, using her ability to restore what data she could salvage.

There, she sees a "final report" on the Radio Noise Sisters Project.

Mikoto soon reads on the project's aim: "The purpose of this research is to identify the DNA matrices resulting in Level 5 abilities, and create them with 100% certainty instead of betting on the miniscule chances of their natural emergence." 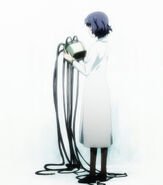 And the sample used for this project is the Railgun, Misaka Mikoto.

Speechless, shocked and disgusted. These emotions flowed into Mikoto as she realizes that the rumors are true, and that she has been deceived.

However, this is not yet over.

As Mikoto reads on, she finds out that the Tree Diagram, the most powerful supercomputer in Academy City, was used in the project, revealing that the clones are inferior copies with abilities no stronger than a Level 3. This discovery caused the indefinite suspension of all related projects to the Sisters Project.

Upon seeing the aftermath of the project, Mikoto heaves a sigh of relief, thinking that the failure of a project bore no fruits, and that there are no clones of her to begin with.

As Mikoto calls it a day, the-one-who-closely-resembles-Mikoto accomplishes her work, deleting the smallest remnant of the Sisters Project.

But, ignorance is bliss.