Toaru Kagaku no Railgun S Episode 6
Because... I Can See What Everyone Has Been Through

Grow Slowly
"Because... I Can See What Everyone Has Been Through" (あたし…みんなのこと見えてるから, Atashi… Minna no Koto Mieterukara?) is the 6th episode of the Toaru Kagaku no Railgun S anime series, and the 30th episode of the anime series adaptation of the Toaru Kagaku no Railgun manga series. It was first broadcast on May 17, 2013. The episode's script was written by Minakami Seishi, storyboarded by Fukuda Michio, and directed by Ishii Kazuhiko.

It should have been aborted, but she was wrong.The Sisters have been produced for the Level 6 Shift, a project whose goal is for a certain esper to achieve Level 6. Misaka Mikoto has espied something in one of these experiments, which has thoroughly shocked her, in the test site, she saw something that was too horrible to bear. A scene where Misaka was murdered.

She charges in utter rage towards that mysterious white "figure," but her powerful attacks have been blown away easily. There, she discovers that the one she is facing is one of a kind in Academy City, the esper able to freely manipulate any vector, the white figure was called Accelerator.

Mikoto speaks of words that she will soon come to rue.

"What would you do if you were to meet your clone?" Misaka Mikoto remembers this question to her by Kuroko, as well as her response: "I think I'd be weirded out and ask her to leave..."

Mikoto finds herself regretting doing that very thing as her newfound friend is crushed by the might of a lanky boy from a distance. Regret swiftly is overcome with rage as Mikoto rushes towards the one who killed her clone.

The boy with white hair lazily confronts Mikoto, who unleashes all of her power onto him by summoning a typhoon of iron sand onto his location. For a moment, Mikoto thought that she has the upper hand, but the boy remains unmoved and unscathed where he stood, noting how her power works and how it was useless against his ability. Mikoto was shocked to discover this as well. However, the moment her eyes glance at the mangled leg of her clone, Mikoto loses control of herself once again.

Using her powers over electromagnetism, she pulled nearby rails from the ground and used them as javelins to strike down on the boy in black. However, Mikoto finds herself in trouble as some of the rails come flying back to her. Mikoto is dumbfounded at how the boy was able to repel the heavy iron rails. But, even the boy she attacked was quite suprised at this unexpected attack against him.

Then, he quickly surmises that Mikoto is the original — the source of the genetic information needed to make clones for the boy to kill, and the one that he needs to kill to cut his tedious work short.

Mikoto prepares a Railgun for the boy in front of her as she asks about his decision to go with the experiments.

The boy's response? For absolute power. For power that makes even confronting him unimaginable.

However, Mikoto finds this answer unacceptable and downright infuriating. With sparks of electricity arcing from her body, Mikoto releases the Railgun into the boy's head... only to find that Railgun deflected into the steel rails just behind her. Mikoto froze as the boy in front of her treated her most powerful move like nothing. Then, he slowly approaches Mikoto to retaliate.

With a heart filled with wrath, Mikoto fires her Railgun after hearing his ludicrous reasons.

Shortly, Mikoto hears a familiar voice, and she discovers an army of clones who bear her striking resemblance, advising the boy to stop fighting Mikoto to avoid any complications that may undermine the success of the project. The boy, although disappointed, decides to comply with the clones' request, and decides to introduce himself to the girl who is responsible for allowing him to unleash this bloodbath in Academy City.

Mikoto falls to her knees while her clones proceed to dispose of the mess Accelerator had just caused. However, reasoning with artifically-made beings seem futile, as they simply proceeded with their duties as part of being mere test subjects for a widespread experiment. 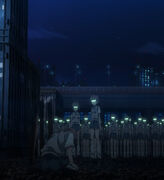 Powerless, Mikoto collapses at the clones' reply on the question of why they allow themselves to be butchered.

In Tokiwadai's dormitory, Kuroko is contacted by Saten who asks about Mikoto's whereabouts. It turns out that neither Uiharu nor Kuroko nor Saten were visited by Mikoto during the night. Kuroko quickly dismisses Saten's suspicions that Mikoto might have eloped with a boy. After ending the call, Kuroko cannot help but be worried.

Unknown to many, Mikoto spent the rest of the night outside, lamenting at the decision she made earlier into her life, and slept until morning had arrived. Then, the girl from several days before, Shinobu Nunotaba approaches her.

Shinobu assumes that Mikoto had known about the "project" and that she was not able to stop it. Shinobu proceeds to listens to Mikoto's rants about the project, but she later points out that what Mikoto cherishes as "lives" may just be "guinea pigs" in the eyes of a scientist, and those who work for science are willing to experiment on those guinea pigs if it would bear fruit in the long run.

Shinobu admits that she was once like those scientists, but things had changed and she is now trying to interfere with the experiments after she discovered that she herself had become fond of the "guinea pigs" that she has accustomed to work with.

Although Shinobu has changed how she sees the clones for the Level 6 Shift Project, Mikoto continues to treat them as objects. She then tells Shinobu that those responsible for deceiving her will not get away with their crimes.

Kuroko finds herself sleepless throughout the night, and her worries become more imminent when Mikoto comes back to her room in a bad shape. Mikoto tells Kuroko that "the usual" happened and goes for a quick shower. Kuroko then skews the truth when talking to Uiharu, Erii, and Saten by telling them that Mikoto had arrived late last night and soon receives a favor from Mikoto...

Later that day, Mikoto treats her friends to a large parfait at a nearby family restaurant. Mikoto tells to the girls that she went to see the stars the night before, much to their surprise and puzzlement. Although Mikoto was able to keep her cool for a moment, her resolve slowly breaks down when Uiharu recalls the code Mikoto asked for that night.

Fortunately, Saten was able to divert the topic by asking the girls to come with her to the arcade. Everybody seems okay with Saten's suggestion, but Saten reminds Mikoto that they are available whenever something becomes too unbearable.

As the five girls head to the arcade, Mikoto remembers what she vowed to Shinobu and how Shinobu pointed out that it would not be easy, with over 20 facilities involved with the project.

Mikoto then tells Shinobu that they are not just messing with a simple girl with psychic powers.

In the face utter despair, Mikoto, ever stubborn, determines to take the experiment down.