Grow Slowly
"AIM Stalker" (, Nōryoku Tsuiseki (AIM Sutōkā)?, lit. "Ability Tracker") is the 9th episode of the Toaru Kagaku no Railgun S anime series, and the 33rd episode of the anime series adaptation of the Toaru Kagaku no Railgun manga series. It was first broadcast on June 7, 2013. The episode's script was written by Yasunori Yamada, and storyboarded and directed by Konno Naoyuki. The animation was co-directed by Fujii Masahiro, Sakai Tomofumi, and Motomura Kouichi.

ITEM, one of the organizations in the dark side of Academy City, received a request to defend a certain facility, had Frenda sprung a trap spread around in the facility. Although, initially cornered, Mikoto manages to break through. Suddenly, before her very eyes, a beam of glaring light broke through before her. With the name of the Meltdowner, the leader of ITEM, has appeared, the 4th-ranked Level 5, Mugino Shizuri.

Exhausted, Mikoto attempts escape, but Mugino's violent attacks ceaselessly continues to follow her from afar. The one who guides Mugino however, is another member of ITEM and her ability. Meanwhile, Nunotaba Shinobu came a calling to the Cranial Nerve Application Analysis Laboratory, determined to personally to put to an end to the experiment that she has been involved in once.

The S-Processor Pathology Analysis Research Laboratory is in shambles. And in the aftermath of an intense battle between ITEM's Frenda and the Level 5 Misaka Mikoto, the Level 5 looks down on the defeated Frenda, realizing that she would not tell any information about her colleagues. As Mikoto barely evades a surprise attack against her, Shinobu sneaks into the lower levels of the S-Processor Cranial Nerve Application Analysis Laboratory, aiming to destroy what she can of the infamous "experiment", a plan that she already has in motion even before Mikoto's decision to intervene herself.

Although she knows that Mikoto has steeled herself to destroy the SISTERS Project-related facilities by her own hands, Shinobu has already decided to make a move herself.

Back at the present time, Mikoto watches as two ladies step out of the hole created by the blast just moments ago. Frenda, still unable to talk after Mikoto's shock paralyzed her tongue, shows her relief as her colleagues from ITEM, Mugino Shizuri and Takitsubo Rikou check up on her condition. Then, as Rikou gives her rather lifeless words of support for Frenda, Mugino approaches Mikoto, only to be greeted by a steel drum hurled magnetically by Mikoto.

To Mikoto's shock, Mugino simply disintegrates the steel drum before retaliating by unleashing a bright green beam of energy at Mikoto. The Level 5 Electromaster survives the blast by sticking herself into a nearby iron wall and proceeds with attacking Mugino from a distance, hurling any magnetic object in range, only to have it completely destroyed by Mugino's ability.

After Mugino comments on how Mikoto clings on to walls like a spider, she decides to employ the help of Rikou. She throws a small canister onto Rikou and asks her to consume some of the contents inside.

Meanwhile, as the scientists began to worry about their visitor's sudden disappearance, Shinobu continues her journey to the lower levels of the facility. After opening the lights to an unlit room, she decides to initiate her plan.

The fight between Mugino and Mikoto begins anew, and Mikoto finds herself unable to stay in one location as Mugino begins her offensive. Mugino also demonstrates that she can deflect Mikoto's lightning attacks and retaliate in a split second. However, Mikoto suspects that there is another threat in the battlefield, and it is in the form of the seemingly harmless girl who came along with Mugino earlier. Mikoto soon overloads an array of pipes and unleashes a cloud of smoke on the area around the girls from ITEM.

Mugino is a bit disappointed that Mikoto ran away, but Rikou, whose eyes have been shaky and dilated after taking a certain kind of medication, assures Mugino that she can track her down using Mikoto's AIM diffusion field which she memorized during the fight.

Mikoto plans to lose ITEM by weaving through the passageways around the battlefield, but she finds out that her moves might have been detected. True enough, Rikou's ability, AIM Stalker, allows her to memorize and track down the movements of any esper with a certain AIM diffusion field, and this, in conjunction with the powers of the Level 5 Meltdowner, Mugino Shizuri, makes them the lethal duo of ITEM. As Frenda finally regains her speaking ability, Mugino decides to continue with the search, determined to snuff out the intruder at all costs. 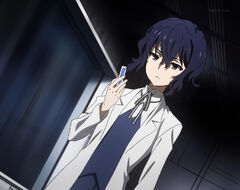 At Shinobu's front, the plans to intervene with the SISTERS Project is on its way as Shinobu prepares the emotion data she has prepared to be installed to the data of the clones yet to be calibrated for the experiments. As she hopes that a relatively primitive program would awaken the clones' ability to gain emotions she begins the installation process. As the program is slowly being installed into the system, Shinobu dwells in the thoughts that her program may be able to instill the will to live in the Sisters, in turn causing a certain bloodthirsty killer to reconsider his deed, but she also has doubts that her program might not even work at all. However, it seems that the memories she had with a certain clone may well be enough to motivate her to continue.

However, it was not enough. Shinobu's head was suddenly pinned to the keyboard as one of the operatives of ITEM, Kinuhata Saiai, confronts her about Mugino's correct prediction about a simultaneous attack on two facilities from two fronts.

Mikoto is slowly losing her edge as Frenda rejoins the battle. As Mikoto narrowly evades another of Mugino's attacks guided by Rikou, she ends up stepping onto another trap laid by Frenda before their battle even began earlier. As Mikoto faces a 3-on-1 situation, Shinobu continues to suffer from Saiai's tight restraint on her.

At that moment, Shinobu thinks that giving it up may actually be a better choice, as the clones which are calibrated to live a limited number of years may still be unable a normal life even with the absence of the Sisters Project. However, upon thinking about Mikoto, she decides to push on with her plan.

Saiai punches through the device where the original files are installed, and Shinobu flies towards one of the thugs who come with her. But Shinobu already announces her victory as the installation is already complete.

However, Shinobu's face change from relief to shock as a flood of warning notifications cover the entire screen in front of her. Shinobu froze as one of the thugs prepares to take him to higher ground, but she quickly springs to life, stealing the thug's pistol and aiming it at Saiai.

Shinobu prepares to shoot at Saiai if she refuses to live. After seeing Saiai's unmoved expression, Shinobu pulls the trigger. Shinobu is stunned upon seeing the bullet stop right above Saiai's clothes. After Saiai reveals her protective ability called Offense Armor, she delivers a quick punch to Shinobu's stomach, rendering her unconscious instantly. Afterwards, Saiai urges the thugs to bring the unconscious Shinobu upstairs, no longer interested in her imminent fate in the hands of ITEM's client.

ITEM's assault continues as Mikoto continues to evade Mugino's guided Meltdowner attacks. However, Mugino knows everyone in the battlefield is at its limits. Although Mikoto can detect their attacks, she is also moving much slowly than before; on the other hand, Rikou's ability can be used for so long, and with Frenda running out of her traps and fatigue setting in, Mugino planned to stalk Mikoto to her final destination and finish her off there.

However, stalking for her prey is simply not her type.

True enough, an exhausted Mikoto is forced on the move once again as Frenda uses her traps once more to confuse Mikoto while Mugino uses her ability to finish off Mikoto. Then, as Mikoto comes into contact with Mugino's Meltdowner beam, Mikoto uses her electricity to bend the trajectory of the beam, effectively deflecting Mugino's attack.

Initially, Mugino is surprised by Mikoto's feat, but soon discovers a link between her ability and Mikoto's. However, she decides to order a retreat on Frenda and Rikou, who are both at their limits.

As Mugino heads out to pursue the target on her own, her eyes fill with the urge to destroy her prey, which is none other than Tokiwadai's Railgun!

No notable locations were introduced during this episode.