Grow Slowly
"Accelerator" (, Ippō Tsūkō (Akuserarēta)?, lit. "One-Way Road") is the thirteenth episode of the second season of the Toaru Kagaku no Railgun anime series and the 37th episode of the series overall. It was first broadcasted on July 5th, 2013. The screenplay was written by Tsuchiya Michihiro and is storyboarded and directed by Ishikawa Kensuke. The animation was co-directed Moroishi Kouta, Fujibe Ikuma, and Naoya Takashi.

Tree Diagram—the ultra-high speed super computer of Academy City that is boasted to even "predict the future". Mikoto invades a facility to try and hack the high-tech computer to end the abominable plan. However, a grim fact comes upon her.

However, something reflected in her eyes at the height of her rampage, the experiment, monitored by the facility. Meanwhile, while looking for the missing Misaka Imouto, Touma encounters an unbelievable sight in a back alley. 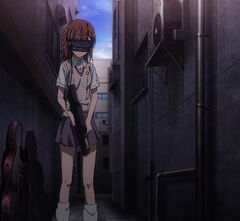 Misaka 10031 appears in front of Accelerator to begin the next experiment, and Misaka 10032 on the other side of the street prepares as well. After a short time to prepare her goggles and the firearms of choice, Misaka 10031 marks the start of the 10,031st experiment.

Meanwhile, in District 23, a disappointed Mikoto quietly leaves the Tree Diagram Information Receival Center, still in disbelief after finding out that the most powerful supercomputer in Academy City has been destroyed. Many thoughts are in her head — how the Tree Diagram was destroyed, the fact of losing a bargaining chip to stop the experiments, and how the experiments continue its smooth progress despite the destruction of the Tree Diagram.

However, a glimmer of hope appears as Mikoto remembers a facility located nearby, one of many that is currently collaborating for the Level 6 Shift Project.

Back in District 7, Touma comes out of Book-On, only to find his friend nowhere to be seen. As he picks up that girl's cat, which Touma calls "Deferred", an alleyway just across the street takes his attention. Touma looks for his friend inside the dark alley, and anxiety sets in as he sees a shallow crater on the ground, followed by an explosion heard from a distance; regardless, he pushes on, following the source of the noise he heard.

Misaka 10031 showers Accelerators with bullets, all of which simply bounce back off Accelerator's ability. Although slightly taken aback by a grenade launched right onto him, Accelerator decides to go on a more offensive stance, using a nearby case of bottles as makeshift missiles that shatter upon impact. 10031 flees from battle as soon as she finds Accelerator go on the attack and heads deeper into the alleyways of District 7, with Accelerator lazily pursuing her.

Meanwhile, Mikoto goes on an electrified rampage inside a District 23 facility. Unlike her more covert operations, Mikoto disregards being seen by cameras and human eyes and marches uncontested, destroying any non-human who stands in her way. As she heads further into the more sensitive machinery of the facility, she unleashes her ability, laying waste of everything she sees, determined that she will destroy anything and everything that is, was, and will be involved in the Level 6 Shift Project.

Touma reaches a crossroad as he pushes on into the alleyway he entered earlier and sees a familiar shoe amidst several pieces of broken glass, as well as its other pair nearby. As he hears another explosion, Touma heads towards the direction of the blast, his tempo increasing by the minute.

Meanwhile, Accelerator reaches Misaka 10031 as one of the bullets from her gun rips through her goggles, causing her to fall to the ground. Accelerator then slows down things a bit by allowing 10031 to guess what his ability can actually do. 10031 once more receives gunshot wounds from the bullets she fires at Accelerator and suspects that his ability involves reflection.

As 10031 is forced to retreat to a dead end, Accelerator reveals the true nature of his ability: vector transformation — the ability to control vectors and, by extension, any physical concept which has vector values like heat flux, momentum, and electric current.

In District 23, the scientists of the facility attacked by Misaka Mikoto could only watch in disbelief as their data was destroyed singlehandedly by the ranked-third Level 5 of Academy City. Mikoto soon heads to a room filled with videos taken from cameras located across Academy City.

She laughs at herself, thinking that she is one step closer to bringing down the Level 6 Shift Project, but doubts in her head remind her about how many clones would need to die before she could end the experiments for good. Mikoto explodes in an electrified outrage as she desperately asks herself for the thing she needed to do to force the-powers-that-be to cancel the project.

Then, amidst the destruction is a live feed of one of the cameras mounted in Academy City, showing someone who looks exactly like her sprawled across the ground.

The boy hands over his next question to his 10,031st victim: "What do you think would happen if one's blood flow is reversed?"

Right after the boy stabs his fingers into Mikoto's look-alike, everything becomes drenched in an ominous red, as if the girl exploded.

Mikoto becomes overwhelmed by despair, while Accelerator, having killed that girl for over 10,000 times, simply walks away.

Soon, Accelerator remembers his first encounter with the Misaka Clones, and the very first experiment. He was quite disappointed due to facing someone who looks like a Level 5 but fights like someone of lower level. Regardless, he was asked to proceed with the experiments, disregarding the lower levels of his "enemies" and the fact that they are — despite being cultivated in mass amounts — humans.

By the end of the first experiment, the clone he encountered met her demise in her own hands, after being shot by the very bullet she fired at Accelerator. Ten thousand and thirty experiments later, it became a mere part of Accelerator's daily life.

Touma finds what was left of Misaka 10031 minutes after, and he was completely shocked by the red that was painted across the alleyway. He called the Anti-Skill soon after, but he found no trace of Misaka 10031 where he found her. As he was left alone after considering his call as a mere prank, a puzzled Touma is joined by another Misaka Clone.

As he was joined by clone after clone, the confused Touma is confronted by a small army of Mikoto look-alikes, telling that Touma, as someone not part of the experiment, has no privilege to know about the "experiment". However, they later reassure Touma that among them is the one whom he met at late afternoon, Misaka 10032. 10032 then points out that the bag she is carrying contains the remains of Misaka 10031, the clone he and the Original met earlier, confirming that a Misaka Clone has died.

Then, 10032 finally reveals their true identity, as Misaka Mikoto's clones, involved in an experiment whose details are heavily classified. She then leaves her cat in Touma's care before leaving with the other clones.

As the night looms over Academy City, Touma is still shaken by the events that had happened. And the first thing that entered Touma's mind was whether Mikoto knew anything about what is going on. He decides to look for answers by visiting the Tokiwadai Middle School Dormitory, but hesitation begins to set in.

Meanwhile, Mikoto discovers what she has to do to put a stop to the Level 6 Shift Project.

Upon returning to District 7, Mikoto gathers her determination to end this once and for all!

Blades moving in this windless night.

No new locations were introduced during this episode.

No new ablities were introduced during this episode,