stand still
"Promise" (約束, Yakusoku?) is the fourteenth episode of the second season of the Toaru Kagaku no Railgun anime series and the 38th episode in the series overall. It was first broadcasted on July 12th, 2013. It's screenplay was written by Hanada Jukki, storyboarded by Sayama Kiyoko, and directed by Takashima Daisuke. The animation was co-directed by Sato Marina, Fuji Masahiro, and Taniguchi Motohiro.

For Oneesama, what else can she say and do but wait patiently? Kuroko does so with determination, though this determination begins to wane when her concerns for Mikoto's everyday-absences rear up in her mind. As she worries, a surprising person appears before her—Touma an acquaintance of her Oneesama.

In an attempt to get even a small clue about what Mikoto is dealing with, Kuroko allows him to enter their room. However, the Dorm Supervisor and her troublesome patrols have come, and she is forced to hide Touma away underneath a bed. Despite his stifled breath under the bed, he finds something intriguing within Mikoto's Kirigumar—the truth hidden behind the "experiments" that the Sisters he had met had spoken of. Touma, now knowing that Mikoto is fighting a battle on her own, hastily sets off running around Academy City in the dark of the night.

Meanwhile, Mikoto has been forced to bring out her final trump card, and now must make a difficult choice...

While worrying about her Oneesama, Kuroko sees the last man she could ever expect.

An exasperated Kuroko sighs as she is left alone yet again for another night, and worry fills her mind as she expected that Mikoto will return to her usual life at this stage. For a moment, Kuroko wanted to do check up on Mikoto, but her resolve quickly wavers. Kuroko ends up clinging to the littlest scent of her onee-sama on her bed, only to find herself asking for more. Although Kuroko is steeling herself to do something about Mikoto's absence, the scent of Mikoto's hair on her pillow proves too much to resist.

Soon, Kuroko hears an incoming call from the visitor receiving device, and to her disappointment, a boy by the name of Kamijou Touma is seen on the other side of the screen.

As Touma struggles over the communications device, Kuroko finds out that she knows the guy as the "ape" who tried to hit on Mikoto on a previous occasion, and suspects that he is here to track down Mikoto's whereabouts. Initially, Kuroko shows indifference at the boy on the other end of the line, but she suddenly thought of using what he knows to find out more about Mikoto's current situation. After advising Touma to wait for Mikoto while she is still away, Kuroko lets him in to her and Mikoto's dormitory room.

Touma is rather surprised by Kuroko lying down on the bed, and is soon told by Kuroko to sit on the other bed. He discovers that he would end up sitting on Kuroko's bed, while Kuroko, stays in Mikoto's bed, much to Touma's suspicion that she is a pervert. Kuroko dismisses this allegation, telling her that such things cannot be understood easily, although Touma objects that stealing a girl of interest's bike saddle is not normal in any way possible.

After Touma is asked to lower his voice to avoid arousing suspicion, he comments about how Kuroko refers to Mikoto as "Onee-sama", thinking that she should be a junior of hers to use such an address. Kuroko confirms this, much to Touma's surprise, revealing how she replaced Mikoto's old roommate using whatever means which is covered by the rules.

Soon, Kuroko goes straight to the matter at hand and asks for Touma's reason for visiting the Tokiwadai Dormitory . However, she just stops him from talking the moment he decides to speak, telling him that whatever he would say would not matter to her. 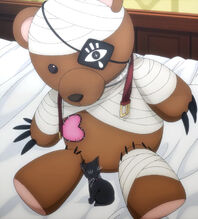 Touma takes out the Kill Bear.

Moments later, Kuroko hears the ominous footsteps of the Tokiwadai Dormitory Supervisor and asks Touma to leave immediately. Kuroko finds out that her teleportation ability won't work, so she kicks Touma under Mikoto's bed. Touma was momentarily startled by a plush bear wrapped in bandages accompanying him under Mikoto's bed, but manages to keep himself quiet while Kuroko tries to lose the Dormitory Supervisor by pretending to complain about the noise outside.

As Kuroko leaves with the Dormitory Supervisor, Touma finds a slip of paper caught by Misaka 10032's cat on the stuffed bear with him. Touma decides to take out the bear, and gets several pages of paper, including a map and a document related to the Radio Noise Project.

Touma soon discovers that the experiment featured in the papers mentions Mikoto, particularly killing 128 Level 5 Mikotos or 20,000 lower-level clones for a certain Accelerator to reach Level 6. Reading on, Touma finds the schedule for the next line-up of experiments to be held for the day, including those for serial numbers 10030, 10031 and 10032. To Touma's shock, the 10,032nd experiment will take place on that very same day, August 20th, just 26 minutes from that moment.

Taking the window out, Touma leaves the dormitory, leaving behind Kuroko unable to ask about what happened to Mikoto.

As Touma holds on to 10032's cat, many realizations enter his mind. Mikoto knew about her "sisters", Mikoto knew about the experiments, and Mikoto knew that they are killed for the sake of attaining Level 6. On that windless night, Touma looks for a certain girl in a concrete jungle. However, the sight of wind turbines being turned by an invisible force gives Touma an idea about where Mikoto is. 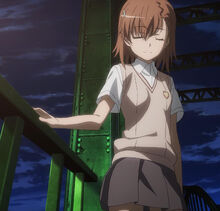 A forced smile is drawn by Mikoto, wishing for Touma to condemn her into her chosen doom.

Minutes later, Touma finds an anguished Mikoto on a certain iron railway bridge, and he quickly confronts Mikoto about the Level 6 Shift Project, shoving aside Mikoto's every attempt to act cool. However, Mikoto goes on with her show, although deep inside, she knew that all that she would hear from Touma would be accusations for making such a bloody experiment possible.

She was prepared for it, but instead, Touma voiced his worries over Mikoto with conviction.

Mikoto soon gives up on pretending, and tells Touma that she has decided to deal with the core of the experiments by herself, leaving shortly after that. However, Touma blocks her way and asks her if she has a sure chance of winning. Touma is shocked to hear Mikoto succumb to her imminent fate, and even tells him that she may confuse the scientists if she would die on the very first move.

Although confused by Mikoto's reasoning, Touma refuses to back down, even as Mikoto sears the piece of paper he holds on his hand. Mikoto's electricity soon covers her body, gathering enough to startle the cat with Touma and overload the nearby lights. Despite this, Touma tells Mikoto that he will not fight her. 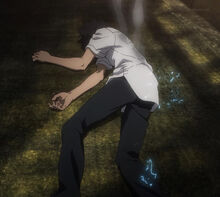 Touma falls for the first time against Mikoto.

Mikoto eventually snaps, with the electricity in her slowly building up. For one last time, Mikoto asks Touma to leave. Touma remains unmoved, and Mikoto decides to pierce through Touma with a powerful bolt of lightning. Touma was quickly thrown some distance away from Mikoto, and she was rather shocked that her lightning bolt connected to him. However, Touma staggers up and stands once again.

Once again, Mikoto questions Touma's resolve, and Touma responds by reminding her that her approach to solving the main issue, while understandable due to the lives involved, will not save her. Mikoto rejects his gesture of kindness, telling him that she does not deserve to live in a world of happiness, but Touma asks him if her remaining sisters would appreciate that remark of hers. 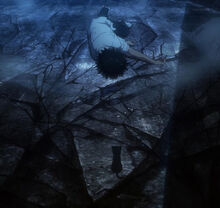 Touma is felled once more by Misaka Mikoto.

At that moment, Mikoto unleashes whatever power she could muster at that moment, and it was more than enough to shut down the lights that dot the railway bridge. Mikoto still holds on to the belief that her death would be of help to her sisters, but Touma refuses to back down to his beliefs either.

Then, Mikoto lets it all out. An enormous orb of electrical energy wraps around Touma and Mikoto, causing destruction where the orb touches.

When the dust settles, Mikoto, fatigued after using her powers to that extent, sees Touma, lying unconscious while 10332's cat mews beside him.

Touma regains consciousness, although still pained from what happened, and finds his head resting on Mikoto's lap. Mikoto talks to Touma about giving him a chance to go back to a normal everyday life since he is not involved in the Level 6 Shift Project in any way. However, Touma doesn't seem interested, and musters a smile despite his injuries. Soon, Touma's face was touched by Mikoto's tears, with Mikoto remarking about how he was able to smile despite being attacked with a force that can stop his heartbeat.

Mikoto then asks him why he was that determined to get himself beat up for her sake. Touma simply pats her head and tells her that he is happy to be her friend.

The toll of the past days shows through. Mikoto is overcome by tears as Touma consoles her.

Touma soon reveals his plans after Mikoto finally wipes down her tears.

He recalls how the experiment is cemented on the fact that Accelerator is the strongest esper in Academy City. Touma decides to challenge this fact by taking him on himself, thinking that the defeat of the strongest Level 5 to the weakest Level 0 would also shake the foundations of the Level 6 Shift Project.

All of Mikoto's insecurities were thrown aside by Touma, who wants Mikoto to help him go back to a world without having lost anything.

Then, Touma makes a promise to bring back Mikoto's younger sister before leaving her side.

As Touma heads to his greatest battle yet, Mikoto is left with tears washing away her sorrows, with Touma's companion cat to keep company.

Mikoto calls on the cat that have been left behind by its owner, as she awaits for the hero to fulfill his promise.

Time is at the essence. The 10,032nd experiment draws near!

No new characters were introduced during this episode.

No new locations were introduced during this episode.

No notable references to culture were introduced during this episode.