Grow Slowly
"Kamijou Touma" (, Saijaku (Kamijō Tōma)?, lit. "Weakest") is the fifteenth episode for the second season of the Toaru Kagaku no Railgun anime adaption and the 39th episode of the series overall. It was first broadcasted on July 19, 2013. The screenplay was written by Sunayama Kurasumi, storyboarded by Iwataki Satoshi, and directed by Sakurabi Katsushi. The animation was co-directed by Ishii Tetsuya, Sakai Satoshi, Motomura Kouichi, and Kabashima Yousuke.

All things that begins must come to an end, as must the experiment. To do so, one must not hesitate to choose death―. Mikoto, who was determined to do so, is stopped by Touma who ends up being hurt. And, in order to achieve his dream of "a happy ending where everyone is laughing," he runs to where the experiment is and where Misaka Imouto lies.

Waiting there is the strongest Level 5 in Academy City, the Accelerator. Disregarding the limits of his body, Kamijou Touma, the "weakest," confronts Accelerator, the "strongest." Charging towards him with only his bare fist to attack...

A little while later, Mikoto finally arrives at the field of battle where Touma is, and finds a surprising sight to behold―!

Kamijou Touma is on the run, and he is slowly feeling the effects of being knocked around by Mikoto during their encounter on A Certain Iron Railway Bridge. However, Touma suspects that his clattering knees are actually the fear of facing Accelerator by himself. Rejecting this notion, Touma toughens up his knees and plans to push on.

Then, as he checks the time on a nearby digital display, to his shock, he realizes that his phone had stalled due to the electric attacks Touma received earlier. It is now 8:34 in the evening, four minutes into the 10,032nd experiment.

Misaka Imouto flinches at the prospect of death.

And thus, Touma makes his demands. A lion-hearted roar that shall make monsters regard who their enemies are.

And right on schedule, the carnage begins. By this moment, Misaka 10032 is now badly beaten as she is thrown across the switchyard, now transformed into Accelerator's playing field. Meanwhile, the strongest Level 5 shows his impatience after finding out that 10032's actions are still unchanged even after giving the Misaka Network some clues about the nature of his ability.

Accelerator asks Touma if he has the right to boss around someone who has the power to surpass all of the other Level 5s of Academy City. Touma shows his disinterest to answer his question, and repeats his imperative speech instead. Accelerator then decides to test Touma's sincerity to save Misaka 10032. Using his ability, he launches 10032 into the air, causing Touma to fumble into catching Mikoto's clone from plummeting to her death. Although managing to catch 10032 at the cost of a painful back, Touma discovers the severe wounds on 10032's body.

Misaka 10032 is left unable to comprehend the actions Touma just performed to save her and points out that she and the other clones are disposable 180,000-yen cocktails of chemicals and thus, unneeded to be rescued. Touma begs to differ, however, pointing out that she is a unique being in this world and telling her to not die on him before confronting Accelerator himself. Misaka 10032 loses consciousness shortly afterwards.

Touma stands once more in front of Accelerator, and he asks the strongest Level 5 about his nightly killings of Mikoto's clones. To Touma's shock, it turns out that Accelerator wasn't forced to perform the killings, and is even enjoying them. With that revelation, Touma vows to beat up Accelerator so bad that he wouldn't do those killings anymore.

With reddened eyes, fair maiden Mikoto waits on the bridge.

Meanwhile, Mikoto is still at A Certain Iron Railway Bridge, moping over the fact that she is unable to stop Touma to heading straight into battle with Accelerator. Deep inside, although she thinks that he may have the power to stop him, she still doubts that Touma can actually pull it off. Then, Mikoto notices the cat that is in front of her, the cat owned by Misaka 10032. As she holds the small cat with her hands, Mikoto slowly faces the fact that she should do something as well. Mikoto then slowly makes her way into the switchyard, where Accelerator continues his rampage; this time against Kamijou Touma.

Despite the chaos being thrown at him by Accelerator, Touma continues to cling for his life, barely managing to survive the metal containers being piled on top of him by Accelerator. As Touma slowly picks himself up again, Accelerator is starting to feel disgust at the person standing in front of him, as Touma reminds him of the many people who lost their lives trying to take away the title of "the strongest" from him. The fact that Touma is a powerless only worsens his disgust.

Accelerator then decides to end this once and for all. After discovering some containers holding sacks of flour inside, he throws one of those containers into the air, careening straight into Touma. Then, with a spark, a dust explosion erupts from the switchyard, engulfing the area in flames.

Miraculously, Touma survived the blast, and Accelerator personally applauds him for being one of the very few who was able to stand amidst his show of ability. Then, Accelerator decides to let Touma choose his way of death: via blood flow reversal or bioelectricity malfunction — in a split second, Accelerator decides to go with both, and he launches himself straight into Touma.

Elsewhere, Mikoto discovers the aftermath of the dust explosion from afar, and decides to quicken her pace, but not before leaving the cat with Touma behind to avoid it being caught in the crossfire. Several moments of running after, Mikoto cautiously enters the switchyard.

Meanwhile, Accelerator, after launching himself into Touma, soon finds himself on the ground. Confusion, followed by pain, then anger overwhelms Accelerator as she slowly realizes that his attack did not work and that he was punched in the face by Touma. Initially, Accelerator thought that he had his redirection turned off at the worst possible moment. Convinced by this, Accelerator prepares to attack him one more time...

Only to have his hand parried and answered by a clenched fist that unleashed tremors onto Accelerator's face.

That unbelievable moment was caught by Mikoto's eyes as she finds herself just a chain fence away from the battlefield. Just like Accelerator himself, Mikoto is completely puzzled that Touma was able to beat down Accelerator, and that he was doing this despite being completely unrelated to the experiments.

Oblivious to Mikoto's presence, Touma continues to punish Accelerator with his bare fist, delivering resounding blows to Accelerator's head and body before receiving berating words for his chain of bloodshed.

At that moment, Accelerator holds on to his beliefs... that he destroyed "things" not "people", and that he needs more power to control all rules and reason.

Then, with Accelerator's hands reached to the sky, a powerful gust of wind rips through the battlefield, gathering enough force to throw Touma and Mikoto off their feet. While Mikoto was able to hold on to the chain link fence, Touma was thrown like a ragdoll into the air, hitting a nearby wind turbine post before dropping to the ground. Mikoto cries out to Touma upon the sight of his unmoving body.

Accelerator, while unmoving, is heavily focused on gathering the winds from around Academy City and the atmosphere into a funnel-shaped cloud. Then, a purple-colored form of energy slowly forms in the middle, gradually building up in size. Accelerator is impressed in this sight, and soon prepares it to descend upon his enemy.

Mikoto then emerges, confronting Accelerator with a Railgun ready to fire. For a moment, she wavers as she sees Touma gasping, as if telling Mikoto to stop. However, she readies to fire once again, determined that her sacrifice will be the end of the experiments. Then, as Accelerator turns back at her, Mikoto soon discovers what Accelerator is trying to do: transforming the air into plasma with enough destructive power to destroy everything within a radius of a few miles. Mikoto becomes alarmed not only by this show of power, but how Accelerator doesn't seem to care about everything else.

At first, Mikoto is daunted by Accelerator's might, but as soon as she found out how he was gathering all of the winds from Academy City into one spot, Mikoto quickly runs to the nearest person who may be able to help her: Misaka 10032. 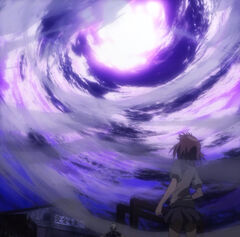 Mikoto looks upon the work Accelerator has done.

Upon reaching Misaka 10032, Mikoto is shocked to find out that her skin is cold to the touch and assumes that she is already dead. Despair looms over Mikoto as yet another of the "sisters" has died, and out of desperation, Mikoto urges 10032 to protect Touma's dream.

Then, words emerge from 10032's mouth as she slowly tries to lift herself off the ground. Although failing to understand what Mikoto said, 10032 felt something in her heart as she holds hands with the Original.

Accelerator is completely consumed by the newly-found discovery of yet another application of his powers, bragging about it to Touma, who is still lying motionless a short distance away. Then suddenly, Accelerator notices that the plasma gathered in the air is slowly dissipating, as well as feeling a gust of "unnatural" air around him. As Accelerator tries to determine the cause of the winds interrupting his gathering of plasma, Mikoto carries 10032, planning to take her to safety before taking on Accelerator himself. 10032 initially plans to let Mikoto get away from all of this instead, and Mikoto points out that it is her turn this time. 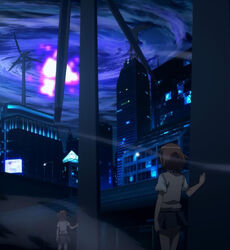 Looking towards the great light. The Sisters, sharing the same feelings, gather and finally betray the experiment.

Soon, Accelerator finally links the "unnatural" winds to the Sisters, who used their powers to drive out the air from the switchyard by manipulating the air turbines scattered across Academy City to disrupt Accelerator's calculations. His rage-filled eyes then turn to Mikoto and 10032, with Mikoto, ready to take him on.

Meanwhile, Touma recognizes a voice nearby, the voice of a girl who often bickers when he is around... who keeps her problems to herself... and is ready to die for her "sisters".

As that girl's pleas for help resound in his head, Touma clenches his right hand once more.

No new characters were introduced during this episode.

There are no questions regarding this episode.