Links
"Moving" (お引越し, O Hikkoshi?) is the eighteenth episode for the second season for the Toaru Kagaku no Railgun anime adaption, and the forty-second episode overall. It was first broadcasted on August 16, 2013 after its schedule was preempted by the Toaru Majutsu no Index Movie: Miracle of Endymion's preview.

It was directed by Takashima Daisuke, the screenplay written by Sunayama Kurasumi, and storyboarded by Nihei Yuuichi. The animation was co-directed by Kumagai Katsuhiro, Fujii Masahiro, Taniguchi Mitsuharu, and Tetsuya Ishii.

Since the Poltergeist incidents, Edasaki has been hard work in the hospital trying to rehabilitate her body, and can now be safely discharged. Meanwhile, Haruue is anxious as she has never lived on her own before and decided to live within a two-person residence. Haruue begins to prepare to move while Uiharu can only feel lonesome at what's happening.

On the day that Edasaki is to be released, they celebrate. Mikoto wants them to join in with the celebration, but trouble seems to have reared its ugly head, forcing Uiharu and Kuroko to answer the call as members of Judgment.

Meanwhile, after Kongou's group caught someone snatching, a strange student appears and admonishes them for their use of their ability. In the dark side each of the members of ITEM, are swayed into a strange mission.

ITEM after defeating the Powered Suits.

In the ruins of a certain building, ITEM voices out their puzzlement after accomplishing what's supposed to be an operation that aims to curb a particular weapons deal. Their mission was unexpectedly easy, and there were no traces of opposition from inside the facility aside from automated armaments. Rikou also feels like something is unusual in this situation.

Then, a steel beam comes flying towards ITEM's leader Mugino Shizuri, only to be vaporized by Mugino's ability, with some help from Saiai's Offense Armor. While seeing the culprit, yet another of those automated armaments that closely resembles Academy City's HsPS-15 units, collapse to the ground, the girls of ITEM check up on each other, with Mugino only sustaining a small cut on her cheek in that last attack.

Elsewhere, as ITEM ponders on their last mission, a group of scientists monitor their actions via camera, commenting on the success of their "test run" and the data it had produced. Soon, one of those scientists, named Aritomi, is contacted by someone else.

Minutes later, ITEM leaves from the facility as it smolders to the ground. The fire can be seen from several blocks away, and one of its unlikely witnesses, a young girl eating a lollipop, innocently gazes at the bright display from a nearby park.

In the Uiharu Residence, Erii rests after having a hearty feast with Uiharu and her friends. Uiharu feels stuffed after filling herself up with the food Mikoto, Kuroko and Saten brought along for the hot pot party, and Erii decides to hand over some antacids to alleviate Uiharu's ailing stomach. Soon, Uiharu brings up the topic of Erii's talk with her teachers. Although a bit startled by the sudden change of topic, Erii assures Uiharu that she already has everything under control.

Uiharu shows a somewhat melancholy expression upon hearing that news.

In the hospital of the well-known "frog-faced doctor", Saten and Mikoto arrive, with the latter carrying some groceries. Saten curiously asks about the boy she saw following Mikoto earlier, and the flustered Level 5 clarifies that it was a stalker of hers, which was different from the person she gave her cookies to. Saten then asks about the identity of the boy who got Mikoto's cookies, and Mikoto tries to alibi her way into Saten's controversial question, only to be cut off by Kuroko's abrupt appearance with Erii and Uiharu. Mikoto then decides to escape the discussion by pushing Erii and Uiharu into the nearby elevator.

Minutes later, the five girls head to Edasaki Banri's room, where they congratulate her for her upcoming discharge in the hospital after a long time recovering. Banri's excited as well, wanting to wear Sakugawa Middle School's uniform soon, a statement that relieves Mikoto after remembering all Banri had to experience in the past.

Banri soon reveals to the girls that she has planned to live together with her friend Erii, and the preparations have been done by Erii and Uiharu long before Mikoto and the others have been informed about it.

Uiharu and the others decide to leave Erii and Banri to talk in private. As they leave the hospital premises, Uiharu explains the urgency in doing the moving-out preparations to her rather disappointed friends. Afterwards, Uiharu reminds Kuroko of their duties as part of the security in the upcoming Academic Assembly — formally known as the Academy City Research Exhibit Assembly, a grand research exhibition among the brightest students of Academy City in the field of academics — and apparently, Saten knows little about this prestigious event.

Elsewhere, Kinuho and Maaya are talking with Kongou Mitsuko. Apparently, the two needed help in the upcoming Academic Assembly, and Kongou agrees to help out. Suddenly, a robbery happens just nearby and the culprit sprints past Kongou, sideswiping her in the process. Kongou complains at this rude action, but she quickly leaps into action upon finding out that the man who passed by her is a robber, using her ability to launch a nearby trash can into the robber, knocking him out immediately.

Kongou's rather heroic deed brings her applauses and praises from Kinuho, Maaya, and nearby pedestrians. However, as Kongou's posse leaves to report the incident to the Anti-Skill, a bespectacled man confronts Kongou about her use of esper abilities, lecturing her about the risks of such an action, leaving shortly after Maaya and Kinuho return.

In the late afternoon, an exhausted Kuroko returns to the Tokiwadai Dormitory after a long day of inspecting the different university facilities participating in the Academic Assembly. As Kuroko slumps on her bed, Mikoto is reminded of Uiharu preparing for Erii's moving out and memories of Kuroko's first time moving in Mikoto's room.

Then, Mikoto decides to do the unthinkable: giving Kuroko a massage. The thought quickly flood Kuroko's mind and she decides to take a shower first, much to Mikoto's surprise.

Meanwhile, Saten joins Uiharu, but not wasting the opportunity to lift Uiharu's skirt while she's oblivious. Although Saten didn't mention it, Uiharu thinks that Saten is with her out of concern after news of Erii moving out; Uiharu then assures Saten that she had already steeled herself for this situation after talking to Erii about it, but it doesn't mean that Uiharu wouldn't be missing Erii. Uiharu, however, remains optimistic since Erii will still be in Sakugawa Middle School when the next school term begins. Saten is proud of Uiharu to the point of rubbing her head in response. 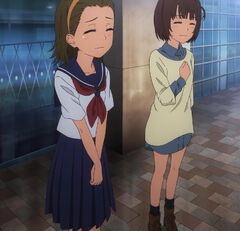 ...By a friend wearing her new uniform.

Two days later, Banri steps out of the hospital wearing the uniform of Sakugawa Middle School, and the four girls surprise her and Erii by inviting them to some cake they bought earlier. As the celebration for Banri's discharge begins, Kuroko receives a report from colleague Konori Mii about jammed traffic signals. Kuroko quickly glares at Mikoto upon hearing the news, and Mikoto quickly denies the allegations. Meanwhile, Uiharu decides to do her Judgment duties and asks Kuroko to come along. Kuroko thought of heading to the incident on her own, but Uiharu decides to leave the celebrations to Mikoto and Saten in the meantime. Although surprised by this decision, Kuroko decides to take Uiharu with her.

Mikoto, Erii, and Saten soon take Banri to a nearby bakery and they eat the cake they bought there. As she enjoys the delicious cake, Banri reveals that she heard from Erii that Uiharu has been doing a lot of things for them recently, namely Banri's admission papers and organizing Erii's room for the move-out, among others.

Soon, in the washroom, Erii remembers that she still has the key to her new home with Banri. Saten, who joins her inside, notices it and remembers Erii's first day in Uiharu's apartment unit. Erii recalls her shy disposition back then, but she decides to be more confident with herself for Banri's sake to repay how much Uiharu has done to her over her stay in her apartment unit.

Meanwhile, Banri mentions to Mikoto her interest in joining Judgment and how much she admires Uiharu. Mikoto then reminds Banri that Uiharu's kindness is not just because of her duties as part of Judgment, but because she is friends with her, to which Banri is relieved to hear. Mikoto then tells Banri that she hopes that someone she knows would also be discharged soon. Although unfamiliar with who Mikoto is talking about, Banri gives her hope for that person's discharge soon.

Uiharu and Kuroko's work finally ends late in the afternoon, and Mii greets them for a job well done. However, Uiharu frantically asks Kuroko to take her back immediately. With the help of Kuroko's ability, Uiharu heads to a taiyaki shop and to the bakery where Mikoto, Erii, and Saten are waiting for the two to return. Much to Uiharu's shock, Banri had to come back for the last check-up, and Erii ends up receiving the box of taiyaki she bought for the two.

As the other girls bicker around Uiharu's idea of giving taiyaki to someone who just had cake, Erii soon remembers that the box in her hands has the same taiyaki that Uiharu gave to her back then. Erii weeps upon remembering this well-cherished memory and vows to Uiharu that she will help Banri the way Uiharu had helped her. Eventually, the reality that she would move far away from Uiharu dawns on Erii, and she hugs Uiharu tightly. Uiharu, despite her best efforts to hold back her tears, eventually breaks down.

As Saten comments on how childish Uiharu can be sometimes, Mikoto just lets Erii and Uiharu savor this moment.

After Erii heads to her new home, Uiharu goes with Mikoto, Kuroko, and Saten. Uiharu wonders if she has done enough for Erii during her stay in her place. Saten and Mikoto assure her that she has done a lot for Erii and Banri. Soon, Saten decides to introduce the girls to a shortcut she discovered some time ago. They soon reach a small park, and in the middle of the flower bed lies a young girl dressed in black frilly clothing, sleeping soundly.

The little girl wakes up moments later, but neither Mikoto, Uiharu nor Kuroko's question was answered. Saten finally steps in and manages to make the girl introduce herself; she tells Saten that her name is Febrie, and she reveals that she knows the name Misaka Mikoto, much to Mikoto's surprise. 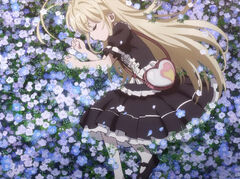 Daydreams in the afternoon on a field of violets.

Now looking eye to eye did Saten have her speak.

Meanwhile, the group of scientists from earlier discuss their success in gathering data about the ranked fourth Level 5, although something unexpected occurred. Despite this, they decide to proceed with the next stage of their plan... with a familiar face joining their ranks in pushing through their mysterious plan!

What strange lives we lead.

This episode features original content, as such, it is not adapted from any previous material.

No notable locations were introduced during this episode.

No new abilities were introduced in this episode.

No notable references to culture were introduced during this episode.