Eternal reality
"STUDY" is the twenty-second episode for the second season for the Toaru Kagaku no Railgun anime adaption, and the forty-fifth episode overall. It was first broadcasted on September 13, 2013. It was directed by Takashima Daisuke, screenplay written by Tsuchiya Michihiro, and storyboarded by Sayama Kiyoko . The animation was co-directed Moroishi Kouta, Komatsubara Sei, and Shigeki Kimoto.

The time left for Febrie is 72 hours.

In order to obtain a clue to save her, Mikoto goes to where Therestina is being imprisoned. This is because Therestina is someone who is known for experimenting on the children living of Academy City after all. However, Mikoto is warned that to taste a glimpse of the darkness, she may never look the same at the city ever again, even hating it.

The two stare at each other, but Therestina nonetheless give Mikoto a clue. The clue is that Febrie is something called a Chemicaloid, made by the people who go to the Academic Assembly. Meanwhile, in the surface, ITEM receives information from the people who had hired them under false pretenses...thus starts the action. 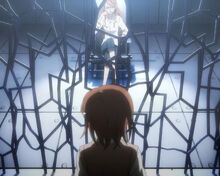 Mikoto faces the irony of turning to one of her greatest enemies as she visits Therestina Kihara Lifeline, now incarcerated in one of Academy City's many correctional facilities. Meanwhile, at a lavish swimming pool in their hideout, ITEM enjoys their moment of relaxation, only for Mugino Shizuri to receive a call concerning their liaison's tarnished reputation after their last mission that turned out to be a fake. Despite outright hating to work up a sweat at that time, Mugino rallies her comrades for another mission.

In Therestina's cell, the one behind bars boasts about how she saw through Mikoto upon seeing her desperate expression and has been expecting Mikoto to ask for her sympathy. However, Mikoto clarifies things by going straight to the point about her mission to save Febrie. Therestina is clearly unimpressed about her heroism and refuses to help, but Mikoto does not want to take no from Therestina and waits for any response from her.

Despite Therestina's attempts to break down Mikoto's resolve, the Railgun remains adamant in getting an answer. Therestina eventually gives up on trying to shake off Mikoto and soon mentions about a group of people who want to make themselves known by creating an entity called a "chemicaloid". Mikoto sees it as something stupid, but an enraged Therestina reminds her that while she is a privileged guinea pig among others, a Level 5, there are some people who are not even given the chance to be a guinea pig and are instead forced to face the "darkness".

After the short talk with Therestina, Mikoto returns to Branch 177 of Judgment. Her friends were clearly shocked upon finding out about her visit to Therestina's cell, and they also receive grim news as Mikoto reveals that Febrie only has 72 hours to live. Soon, Kongou with her posse barge into the Judgment office, bringing a set of new clothes for Febrie to compensate for the fact that she was unable to contribute to the investigation.

As Febrie is brought to a point where she needs to consume more of her "life-saving" candy, Uiharu begins looking for more clues from Academy City's databases. The picture of a bespectacled man catches Kongou's attention, and she reveals that he was the man they saw earlier, whose name is revealed as Aritomi Haruki, a returning winner of the Academic Assembly.

Uiharu soon finds out that Haruki, as well as a lot of the participants of the Academic Assembly, did not join this year. Kuroko thinks that there is something to do with this and Haruki opting out of the competition.

Saten and Uiharu bring a more energetic Febrie back to Uiharu's place. Uiharu continues investigating on Aritomi Haruki's profile, and she finds out that he had dropped from school some time ago, and this somewhat disappoints Saten, thinking that having his brilliant mind used for bad things is a waste of his genius.

Meanwhile, Kuroko does her share of work by contacting Anti-Skill's Yomikawa Aiho for more information, but is saddened by the fact that Anti-Skill has their hands tied after losing possession of vital evidence. Soon, she notices that something is bothering Mikoto and asks her about it. Mikoto explains that it was about Therestina's words about her status as a Level 5 and it made her wonder if she wouldn't have friends like Kuroko if she wasn't Tokiwadai's Level 5 Railgun.

Kuroko comforts her by telling her that she does not think about Mikoto's prestigious title and is sincerely friends with her. Mikoto soon feels that Kuroko is up to no good once again, so she electrocutes Kuroko before she could do anything lecherous.

The next day, Mikoto and the others meet up at Branch 177 of Judgment once again. Uiharu shows her discovery of Aritomi Haruki acting as part of the board of directors of a certain Study Corporation, a company that produces drugs and other chemicals, with a factory located in District 17. She finds it odd that the location, once a normal, old factory building, was purchased for an exorbitant price, and the other girls suspect that it may have been the production facility for Febrie and/or her lollipops.

Mikoto decides to visit District 17 to investigate personally. As she rides a train to get there, she passes by a certain iron railway bridge, where she was confronted by a spiky-haired boy about her decision to take on Accelerator. Although she feels that the boy was too pushy in his dream, she thinks that having his kind of mentality would make things better for her.

In the core of Study Corporation, Aritomi discovers that their first lab has been breached, although he is rather calm about it because it was a mere trap that entices those who has enough knowhow to break through its security. He then tells his colleagues that the lab only contained data for a particular poison neutralizer. Shinobu soon stands up and decides to visit the laboratory, to make sure that there are no variables left unchecked for their plan.

Elsewhere, ITEM begins their rampage, and the Powered Suits that defend that area were simply turned to wreckage by the attacking team. However, Mugino is angry at how everything turned out, as none of the Powered Suits were piloted and that they turned up at another empty facility. Meanwhile, as Mikoto listens to their conversation, she discovered that ITEM's very own AIM Stalker was able to track down the movements of the Powered Suits, leading her to think that there may be someone who is able to control the robots from afar using strands of hair as a conduit of sorts.

After ITEM leaves the premises, Mikoto decides to investigate on the remains of the destroyed Powered Suits. As she searches the place, she senses some electromagnetic waves nearby and follows them to the source. She turns up in a console room, where Shinobu is busy doing something.

Mikoto confronts about her involvement in Febrie's case, but Shinobu instead finishes her job and hands over a stick-like storage device, which contains the recipe for the lollipops Febrie needs to survive. Shinobu then takes this opportunity to apologize to Mikoto for forcing her to take care of Febrie, as she thinks that Mikoto is the only one capable of saving her. At that moment, she is already relieved that Mikoto now has the key to making it possible.

Suddenly, Aritomi Haruki shows up at the console room, revealing that the data now in Mikoto's hands is a dummy, a part of his additional safety measures to keep vital information from leaking out. Now, Haruki has discovered that Shinobu is a traitor, and he forces her to make a painful decision.

Haruki throws an injector filled with a paralyzing drug and tells Shinobu to administer the drug to Mikoto in exchange for keeping the safety of the true recipe for the poison neutralizing agent used for Febrie's lollipops. Although Shinobu is hesitant to do it, Mikoto tells her to push on for Febrie's sake. Shinobu stabs Mikoto with the injector as she requested, and Mikoto instantly collapses due to the effects of the drug. However, much to the shock of the two girls, Haruki destroys the precious data in front of them.

There, Haruki tells them that Febrie's well-being is not important as she was just a spare for the greatest invention of Study Corporation, which they call "Janie".

Other than the ITEM swimming pool scene taken from the 43rd Railgun chapter, most of the content in this episode is an anime original.

No notable abilities were shown during this episode.

No notable references to culture are shown this episode.