Toaru Majutsu no Index Wiki
Register
Don't have an account?
Sign In
Advertisement
in: Articles to be expanded, Episodes, Toaru Kagaku no Railgun T Episodes

nameless story
Joining the Battle (参戦, Sansen?) is the 11th episode of Toaru Kagaku no Railgun T. It was broadcast on April 10th 2020.[1] The episode was directed by Yamamoto Yusuke, the screenplay written by Ishino Atsuo, and storyboarded by Tachibana Hideki and Horiguchi Kazuki.

Upon tuning the brainwaves of the Exterior and undoing the protections installed on the Sisters, Gensei took over the Misaka Network. "Can she be able to reach Level 6—the sense of the heavens?" With those ominous words, Mikoto's powers went out of control. As she transforms into a grotesque form, Mikoto delivered an immensely powerful attack on the Windowless Building, with someone's voice guiding her along.

A massive lightning bolt brought Academy City to a state of turmoil. Upon witnessing this attack, Shokuhou, Kamijou and the seventh-rank Level 5 rushed into action! And Kuroko, who now knew the person targeting Mikoto, rushed to the battlefield with Uiharu and Saten supporting her. Sure enough, the puppet controlled by Kouzaku made its appearance.

Dark clouds envelop School District 2. Kamijou Touma, who was just informed by Saten and Xochitl about Misaka Mikoto being targeted by someone, rushes to her location. Saten also relays what she knows to Kuroko, and Uiharu confirms the presence of powerful electrical discharges at School District 2. Meanwhile, Kouzaku Mitori, who had recently been given access to Exterior, uses its power to goad Mikoto into attacking what she claims as the source of the suffering of the Sisters: the Windowless Building. In response, Mikoto sends a massive lightning bolt upon the Windowless Building. Mitori discovers shortly after that it sustained no damage from the powerful attack. Gensei is aware of the failed attack on the Windowless Building and recommends waiting as he claims that Mikoto's power is still 2% into the path to Level 6.

In spite of the strain she is experiencing due to the unauthorized use of her ability, Misaki is able to prevent Anti-Skill from a potentially fatal intervention against Mikoto. As the Anti-Skill prioritizes evacuation policies, she thinks about ways to stop Mikoto at her current state. Then, by sheer coincidence, Touma appears within the range of her ability. Misaki takes the opportunity to "telepathically" inform Touma of what has happened to Mikoto and asks Touma to "try" disconnecting Mikoto from the infected Misaka Network using his right hand.

Misaki soon heads to the rooftop, where she frees Keitz from Gensei's control of him earlier. Upon requesting Keitz to bring Mikoto's clone somewhere safe as she pursues Gensei, Misaki is restrained by Mitori's liquid metal puppet. Kuroko frees Misaki shortly after, and uses her ability to teleport Keitz, Mikoto's clone, Misaki and herself away from Mitori's puppet. Kuroko parts ways with Misaki after she was given an instantaneous mental briefing of what has happened so far.

Touma continues his attempts to touch Mikoto with his right hand. But, the rain of debris delivered by Mikoto poses a great amount of danger to him. Soon, the seventh-rank Level 5 Sogiita Gunha joins the battle and begins arguing with Touma about being near such a dangerous situation. Eventually, Touma and Gunha realize the capabilities each other and join forces in dealing with Mikoto's rampaging powers. 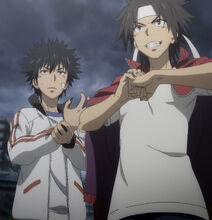 With Uiharu and Saten to assist her, Kuroko begins a thorough search for Kouzaku Mitori around Mikoto's current location. Meanwhile, Touma and Gunha repel Mikoto's attacks, with Gunha destroying the rubble and Touma nullifying her electricity. With debris and an iron-sand barrier still surrounding Mikoto, Touma tells Gunha of his plan to get close to Mikoto, and Gunha decides to use his Super Amazing Punch to clear the path for Touma, who was thrown immediately after Gunha delivered the punch. To Touma's surprise, his right hand can only dispel a small area for a short period.