Toaru Majutsu no Index Wiki
Register
Don't have an account?
Sign In
Advertisement
in: Articles to be expanded, Episodes, Toaru Kagaku no Railgun T Episodes

Part of the Dream Ranker Arc

Aoarashi no Ato de
Possession (憑依, Hyōi?) is the 23rd episode of Toaru Kagaku no Railgun T. It was broadcast on September 11th 2020. The episode was directed by Sokuza Makoto, Horiguchi Kazuki and Tanaka Tetsuro, the screenplay written by Yasukawa Shogo, and storyboarded by Takada Kouichi, Yoshida Toru and Nagai Tatsuyuki.

The earnest intentions that led to participating in the experiment now carry the responsibility of having created the "Doppelganger". Kuriba, who tried to carry all of the burden by herself, reminded Mikoto of her own past. After going back to the origins of Kuriba's resolve, Mikoto encounters Scavenger, which was hired on a mission to capture the Doppelganger.

To compensate for the injuries she received earlier from Scavenger, the Doppelganger adopts the characteristic of integrating surrounding material into herself. Aware of the possibility that the "soul diffusion and possession" is already taking place, something that Kuriba fears, Mikoto joins forces with the Scavenger girls. Meanwhile, Scavenger's Leader aims to complete their mission by collaborating with Mikoto.

Leader tries to convince Mikoto to join forces with them.

Misaka Mikoto's sudden appearance shocks Scavenger, who are not aware that a Level 5 would be involved in their operation. To hide their true identity and purpose, Leader introduces her group as the official party assigned by the facility to retrieve the escaped Doppelganger, and even offers an opportunity to join forces. Yakumaru quickly picks up on Leader's plan and claims that the Doppelganger was already injured before they could find their target. Although unsure if Scavenger's discovery of the Doppelganger's new ability to incorporate nearby debris to itself is true, Mikoto becomes curious to confirm it firsthand.

Leader decides to send out Yakumaru and Naru to retrieve the injured Seike, while she receives several questions from Mikoto. Scavenger's experience with a Level 5 compelled them to inform themselves about the other Level 5s. Leader uses this to lead Mikoto into believing that they are affiliated to Judgment, and she even manages to excuse Seike's behavior by stating her tendency to pick fights with strong people.

To Leader's shock, Mikoto is actually in contact with the other Level 5 of Tokiwadai Middle School, Shokuhou Misaki, who is planning to rendezvous with her. To prevent Misaki from exposing her bluff, Leader is forced to expose her ability. In return, Misaki informs them about the data center of the facility which is actually a stealth airship that occasionally travels to the facility to obtain experimental data. After handing over a Gekota communication device to Mikoto, Leader guides her to the location of the Doppelganger.

Leader and Mikoto pursuing the Doppelganger.

Mikoto continues to pursue the Doppelganger until it begins to gather more debris around her. Eventually, a massive creature is formed from this debris, and this can be seen from Scavenger's drop-off point. The female researcher who was at the warehouse at that time is shocked of its size, as well as how it demonstrated their hypothesis on the effects of destroying a soul's container. Although initially refusing to sign off the mission under technicalities, the researcher is coerced into doing so after being unable to escape in her vehicle due to Seike's ability. Scavenger then quickly makes their escape with the help of a paper vehicle fueled by Yakumaru's thermite bombs before the Doppelganger flattens the warehouse.

As the Doppelganger continues to attack Mikoto, the Electromaster quickly understands the capabilities and weaknesses of her enemy's "soul possession". Taking note of this, the Doppelganger gathers an immense amount of debris around her, creating a massive beast of concrete that towers in the night sky. 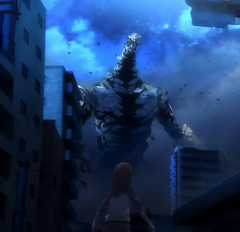 The doppelganger gathers an immense amount of debris to create a massive beast.