The second volume contains chapters 5 to 9 of the Toaru Majutsu no Index: Miracle of Endymion Manga, and primarily deals with the conspiracy behind Ladylee Tangleroad's actions and the struggles of Meigo Arisa and Shutaura Sequenzia against them.

With the opening of Endymion upon them, Shutaura captures Arisa for Ladylee. However, questions begin appearing before her as she sees Arisa having a piece of mysterious bracelet she has. Here, Ladylee appears and tells her of the true nature of the Miracle of 88, the death of her father, and Arisa. With time of the essence, Touma and the others try to stop Ladylee and her nefarious plans while Shutaura and Arisa try to come to terms on who they really are.

The story of curses and wishes cross paths once again with a miracle.

Meigo Arisa who is targeted by both magic and science side has been taken before Ladylee after a scuffle. Knowing of the circumstances surrounding Arisa, Kamijou Touma and Index go into space where Arisa's concert is being held, vowing to get Arisa back...!! Will the story of Shutaura's wish and Ladylee's curse be once again visited by a miracle...!? All the popular characters of the Toaru series make an appearance to give a miraculous closure to this comic adaptation of the movie!! 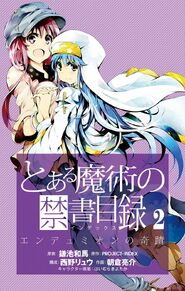 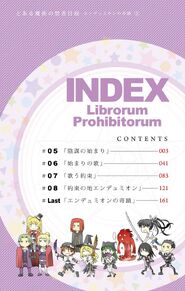 Retrieved from "https://toarumajutsunoindex.fandom.com/wiki/Toaru_Majutsu_no_Index:_Miracle_of_Endymion_Manga_Volume_02?oldid=241516"
Community content is available under CC-BY-SA unless otherwise noted.