This article is about the PSP game. For the franchise overview, see Toaru Majutsu no Index.

Toaru Majutsu no Index (PSP game) is a fighting videogame based on the Toaru Majutsu no Index universe. It is developed by ASCII MediaWorks and was released for the PSP handheld console on January 27, 2011. The video game features an original story by the author of the series, Kamachi Kazuma.[1] The opening theme is ANSWER, performed by Maon Kurosaki.

As with many fighting games, players choose a characters from a lineup, and engage in hand-to-hand combat with an opponent. It is primarily a competitive two player series, but a human player can fight an AI-controlled character for practice, amusement, or to advance the game's story.[2]

The game provides an option to switch character's costumes before a match. Most of the costumes appear in the story, however, a couple are simply color swaps, as the character has yet to wear any other costume.

In the game the player has the option of using a partner to be used as support during the match. All the characters can be used as partners, however, both Index and Last Order are exclusively partner-type characters, and can't be used for fighting. All fighting characters can be partnered up with every other character, however, some partnerships work better than others. For example, Kamijou Touma and Misaka Mikoto are more suited to be partners than Kamijou Touma and Accelerator. A notable aspect is the different interactions a character has depending on their opponent before the beginning of the battle.

A prolonged cutscene just before the start of a match occurs when two specific characters face each other, which replaces the characters' standard opening lines. Examples include Oriana Thomson teasing Misaka Mikoto about her "growth", or Touma acknowledging Accelerator as the strongest esper and himself being a level 0.

On a related note, neither Index nor Last Order have any pre-battle interactions since partners are only shown after such scenes. Despite this, Index and Last Order due have a unique interaction (audio only) with their partner on the character select screen should they be partnered with Touma and Accelerator respectively, which replaces their standard line. These are the only instances where the paired combatants will converse with each other after being selected.

Aside from the special moves that characters have (called Overdrive moves), there are team-up moves called Unison Raids. These moves can only be performed when the player uses a pair of characters with a certain frequency, and an amount of "partnership" is required. This "partnership" factor can be increased by playing the VS CPU modes, with a maximum level is 5 (3 being the minimum requirement for a Unison Raid). Partnership appears to shorten the time needed to call the player's support character.

Players engage opponents in various locations derived from the Toaru Majutsu no Index series, like the bridge where Mikoto fights Touma or the streets of Academy City. However, some stages can only be unlocked after finishing a character's route in story mode. For example, the Oowarai Beach stage can be unlocked when the player is doing Touma's route.

Before beginning a match, in addition to selecting one's fighter and support, each team will be asked to choose from a list of accomplishments. Fulfilling and/or maintaining the conditions listed will grant a boost in offensive power. Harder conditions result in greater boosts. The word "Identify" will appear near the status bar to indicate the boost is active. Several achievements must be unlocked before they become available.

Unlocking conditions for some Accomplishments are not yet known with certainty. This applies to those obtained through the use of a particular character, as while it is clear that an accomplishment is unlocked by using the specified character as either a player or partner, it is not known precisely what one must achieve while doing so.

The player is to pick among five character routes which unlock certain characters as the story progresses. Each of the five routes follow a certain storyline, and requires fighting against certain characters to advance to the next stage. At first Touma's route is the only one that's playable, with the route select screen only becoming accessible after clearing Touma's route. Additionally, there are additional scenes that play upon first completing a route which depend upon the total number of routes completed. These extra scenes are connected to the Final Chapter.

Versus Mode allows players to play against AI-controlled opponents, either in Solo Mode (where players fight against opponents without any support) or in Cooperative Mode (where a player fights against an opponent with a support character each).

Some characters are available as exclusively supportive characters (Index and Last Order), and cannot be played as a main character.

In training mode, a player is transported to the training area stage, here, a player can train their skills on a character. Players can either set the AI to be stationary or fight back in order to practice various combos, tactics and strategies, and it immediately recovers health after incurring damage.

Training mode also let's you adjust various settings, such as automaitcally refilling your overdrive gauge, enabling Unison Raids regardless of normal limitations, and disabling the interval between partner assists. Also, some characters have personalized settings tied to their specifcifications. For example, you can fix Stiyl's number of rune cards or specify which of Oriana's random magical attacks will trigger.

Categorized into two sections: Survival and Time Attack. Survival mode is where a player is pitted to fight opponents to increase their score, the opponents get increasingly more difficult after each win. Time Attack type is similar to Survival, however, the player's time is recorded in order to determine how quick a single run of the challenge was played.

The Gallery section of the game contains various extras for the user's perusal, such as the CG artwork that the player unlocks after playing the story modes, changeable backgrounds and sprites for use in screenshots, the soundtrack of the game, voices, as well as the total score the player has earned after playing the game and the statistics regarding the player's achievements.

The gallery features not only the game sprites during the "visual novel" segments of the game, but the 3d sprites for the characters and their alternative costumes. When activated, the 3d model in the gallery can do a basic pose, and can be moved around in different angles. 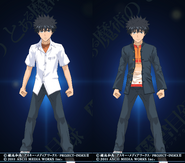 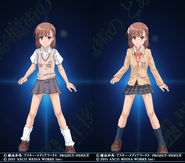 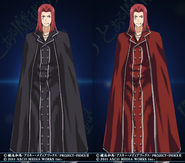 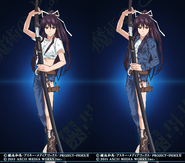 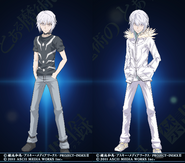 Accelerator costume A (left) & B (right) 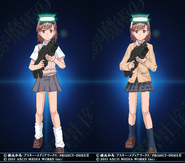 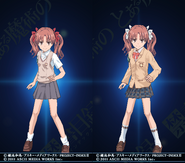 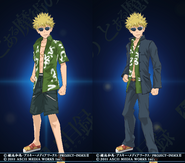 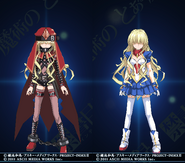 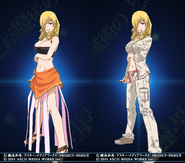 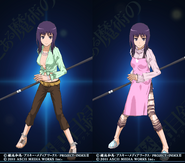 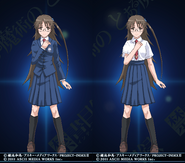 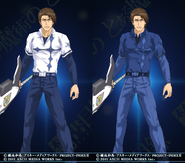 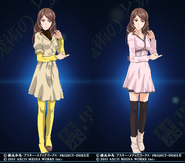 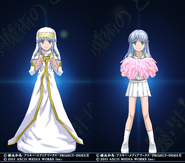 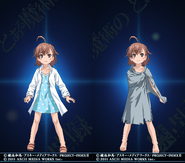 The gallery features music that is unlockable as one progresses through the story mode routes of the game. Music from both Toaru Majutsu no Index and Toaru Kagaku no Railgun anime are used in the game.

Tsuchimikado Motoharu
Add a photo to this gallery

The game was received warmly, managing to sell 56,017 copies in its first week of release.[6]

Retrieved from "https://toarumajutsunoindex.fandom.com/wiki/Toaru_Majutsu_no_Index_(PSP_game)?oldid=206568"
Community content is available under CC-BY-SA unless otherwise noted.