Part of the Angel Fall Arc

Rimless ~Fuchinashi no Sekai~
"Kamijou Touya" (, Chichioya (Kamijō Tōya)?, lit. "Father") is the 16th episode of the Toaru Majutsu no Index anime series. It was first broadcast on January 25, 2009, and was directed by Kawabata Takashi, storyboarded by Takigawa Kazuo, and written by Minikami Seishi.

The red sister that appeared before Kamijou Touma is named Misha Kreutzev, who belongs to Annihilatus of the Russian Orthodox Church. She came to Japan in order to find out the source of the grand magic Angel Fall, that is the basis of the strange phenomenon that is going around the whole world. At the same time as this, two magicians from Necessarius of England, who somehow escaped the replacement of appearances of Angel Fall appear before Touma. It was Kanzaki Kaori, and Touma's classmate, Tsuchimikado Motoharu, a magician who has sneaked into Academy City as a spy. Touma teams up with the three of them in order to find out the magician who set-up the large scale magic ritual Angel Fall. However, Kanzaki's appearance that looks different from her personality begins confusing other people.

Touma is sitting alone, thinking about how Motoharu is a member of Necessarius. In a flashback, Motoharu explains on how an agent or two is sent out to enemy territory (Academy City) as spies; Motoharu continues by saying that he knows a lot of things regarding Touma, such as his Imagine Breaker. Motoharu says that even though he says he is a magician, some of his magic has become unusable after going through the Power Curriculum Program. Kanzaki adds by saying that the spellcaster of Angel Fall is near Touma, as such they should move now before the caster does his/her next move, to which Misha agrees with her assessment. Touma complains about this, and says that he is with family members he hasn't seen in a while, though Kanzaki asks if they appear like they should to him, to which Touma is forced into silence.

Back in the present, Touma takes out the Ganesha souvenir from his pocket and tries to throw it away, though before he could do so, Motoharu appears in and says that replicas such as the souvenir have some power enchanted within them as well, as is the principle of Idol Worship. Touma and Motoharu talk about on how the latter is magician, though Motoharu states he was one. He says that he – the best Onmyo professor of Necessarius who specialized in feng shui – is now an ordinary human. Touma asks why he is not with the others, to which Motoharu replies that since the activation of Angel Fall, he and Kanzaki were forced to cast seals to their bodies, though they were unable to do so completely, as such his appearance to others is of Hitotsui Hajime – the idol. Touma asks whose form Kanzaki has taken, to which the scene switches to Touma's family and Index, talking to Kanzaki who are amazed by her appearance, which is of Stiyl. Back in the room, Touma is amused by her taking the form of Stiyl, however, he soon asks Motoharu on how he was able to cast a spell on his self. Motoharu confirms to Touma of his magic use by showing his injury, and saying that it would be fatal for him if he uses magic again. Motoharu then reminds Touma not to use his "Such misfortune."around Kanzaki, as unlike Touma she is blessed with extremely good luck. Motoharu says that Kanzaki is a person who cannot tolerate her own fortune. Motoharu says that she was a member of the Amakusa Christians, and was determined as its leader at birth; he continues by saying that she is a Saint, one who is capable of wielding the power of the Son of God. According to Motoharu, Kanzaki cannot stand being blessed with great fortune. Touma complains about this God business she is in, and asks why she is worried about it, to which Motoharu states that she alone knows. Motoharu then asks Touma what fortunate people feel when they always win the lottery, they'd have to have other lose it.

Before Touma could answer, Kanzaki barges into the room surprising the both of them. The scene cuts to Touma and Kanzaki outside of the male bathhouse, she explains that she wants to take a bath to relieve herself, though he can't do it in the female bathhouse since her form is that of male. Kanzaki asks Touma to guard the door as so no one comes in, she then enters it; the scene then cuts to Kanzaki entering the bath alone. Meanwhile outside the bath, Touya arrives and asks Touma to take a bath with as father and son like old times. Touma tries to stop him though he is unperturbed and enters the bathhouse bringing Touma along with him. However, they encounter the naked body of Kanzaki as they enter, though Touya is unaware of it and greets her. Seeing this, she grabs her sword and attacks them forcing the both of them to run away. Kanzaki dresses herself again, however, she is interrupted by Motoharu who says that they are indebted to Touma for saving Index's life, and that they should thank him, though he questions Kanzaki's behavior in attacking him earlier.

Touma and Touya are later seen catching their breaths; they talk about Kanzaki's sexual orientation before Touma suddenly realizes that his father's current appearance is that of a stranger due to the effects of Angel Fall. Seeing Touma's expression, Touya says that his expression is similar to that of Touma's mother; he says that Shiina will have that expression on her face, when she and Touya would part ways, and that he couldn't bear seeing her like that though, though he was quite fond of that look as well and says that Touma takes a lot from his mother. Their conversation stops after seeing Misha standing alone in the dark, to which Touya urges Touma to go talk to her.

Touma approaches her, and tries to start a conversation with her, though he fails miserably as he is simply ignored by her, even after telling a joke to her. She eventually relents after Touma offers her a piece of gum, though she seems reluctant at first she eventually takes the gum off of Touma's hand with much complication. Touma then asks her if she has found anything about Angel Fall, to which Misha simply shakes her head. Not knowing much about Angel Fall, Touma asks her about it. Misha says that she doesn't know why the magician cast Angel Fall, though she gives two likely reasons for it; she also says that the spell is incomplete. According to Misha, the power of an angel can destroy The Vatican, and if Angel Fall is completed a great calamity similar to that of ancient lore will occur. Misha restates the importance of finding the culprit before it's too late.

Back in the resort, Touma overhears from the outside a certain conversation between Shiina (still in the form of Index) and Touya. Knowing exactly what they are talking about, Touma rushes inside the resort and barges inside their room, preventing his parents' attempts, much to the chagrin of his father.

The next day, Shiina rushes out of the room apparently worried about something, and hitting Index (in the form of Aogami) who was pacing back-and-forth worrying about Touma not in his room. Shiina says that she forgot to lock the door to the house and says that she'll be back after locking it, which would take her the whole day by train. Misha however, appears before them and asks her if she may accompany Shiina on her trip, which she gleefully agrees to. After they leave, Touya makes a joke on how Misha is now trying to score points with her future mother-in-law, Shiina, after he says that Misha has to marry Touma. This aggravates Touma, though Touya's jokes continue which references Touma's night together with Misha and mentions her being modest after trying not to touch Touma's hand at all. This makes Touma suspicious, as he remembers that Misha tried to carefully take the piece of gum from Touma's hand without touching it.

Touma later has a meeting with Kanzaki and Motoharu, discussing what Misha said to Touma the night before. Touma asks how Misha would know that Angel Fall is incomplete, even there is barely no information regarding it, this surprises both Kanzaki and Motoharu. Touma continues by saying how Misha tried to not touch his right hand as well, to which Motoharu and Kanzaki concludes that she may have been the spellcaster of Angel Fall and didn't want the spell to be erased by Touma's hand before it can be completed. Motoharu then demands Touma to take him to his house, to which he agrees. Touma later asks his father to draw him up to their new home as they have moved, though he misunderstands his intentions at first, he eventually relents to Touma's demands.

While in the taxi cab, Touma discusses with Motoharu why she is after his mother assuming Misha is the spellcaster. Motoharu is unable to answer, and says that they need to ask Misha personally regarding that. Touma and Motoharu arrive at the Kamijou Family residence before Misha and Shiina. Here, they discover a variety of arranged souvenirs collected by Touya inside the house, which Motoharu warns not to touch. While walking around Touma sees pictures of his mother and father, he suddenly realizes that his father looks the same even after the activation of Angel Fall. Motoharu says that the only person who is not affected by Angel Fall besides exceptions like Touma, is the spellcaster, Touya. Suddenly, Shiina and Misha arrives, and is somewhat surprised by Touma and Motoharu's presence. Misha suddenly runs-off with Motoharu trying to pursue her, however, he is stopped by Shiina who hugs him, as Motoharu has borrowed Hitotsui Hajime's (the idol) form. Unable to do anything, Motoharu tells Touma to go after Misha, as she will definitely try to kill the spellcaster of Angel Fall, his father.

While running, Touma asks himself how his father has gotten himself involved with the occult and why he activated Angel Fall. He is however, nearly run over by a lorry driven by a man who has taken the form of Himegami Aisa. After initially being irritated by Touma's recklessness in running into traffic, the driver is later convinced by Touma to give him a ride after saying that he needs to save his father.

Touma arrives back at the resort and asks Kanzaki where his father is; she says that he is in the beach, and asks what exactly the matter is. Touma answers her, to which she says that Touma must wait now, as this has become her business; Touma however refuses, and says that he himself will take matters into his own hands. Kanzaki tries to persuade him, but Touma is resolute, as they are dealing with his father. The screen cuts to Touya walking alone in the beach, being confronted by his own son – Touma. 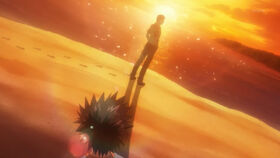 No new characters were introduced during this episode