Index Arc
The first Toaru Majutsu no Index light novel volume was first published on April 10, 2004. It is the first novel in the Toaru Majutsu no Index series and the debut novel of Kamachi Kazuma for Dengeki Bunko. The volume was later localized in Chinese for release in Taiwan and Hong Kong on August 29, 2007 [2] and Mainland China on February 2, 2012.[3] An English version of the volume was released on November 18, 2014.[4]

It depicts Kamijou Touma, a hapless young man with the Imagine Breaker living in Academy City, the city of science and esper powers, meeting Index, a girl from the mysterious world of magic, who will forever change his life.

In the balcony of my room, a snow-white nun suddenly falls from the sky.

Kamijou Touma mutters, and the girl that looks like a nun had this to say: "I had escaped from the world of magic and came here."

This is the place where people recognize "supernatural powers" as an "ordinary science"... the anti-occult Academy City.

Touma is soon accompanied by this mysterious girl named Index when a real magician suddenly appears from behind them!

Thus presenting this anticipated school action story of a newcomer!

NOTE: The misspelled word "Egde" (edge) exists in both versions. 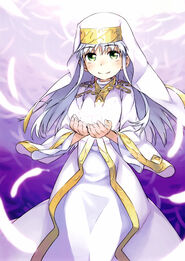