A widespread blackout shut down most of Touma's appliances, causing most of his food in the fridge to go rancid overnight. To make things worse, Touma is reminded of his constant streak of misfortune — breaking his ATM card and needing to do supplementary lessons. As he tries to sort things out for the day, he decides to dry out his futon when a foreign-looking nun with a vicious appetite appears hanging on his balcony.

The nun introduces herself as Index, a nun from the Anglican Church, and she recalls being chased and shot in the back, only to escape unscathed due to the nun's habit she wears, which is called a Walking Church. Index, however, only knows that members of a magic cabal are chasing her. Touma and Index's opposing beliefs on magic and science soon erupt into an argument between the two, eventually returning to the issue at hand — the pursuit of Index, particularly due to the 103,000 magical books inside her head.

Index soon shifts her focus on Touma's right hand, which he claims is something that can nullify supernatural phenomena or esper abilities. As Touma is doubtful of Index's claim of possessing 103,000 books inside her, Index is just as skeptical on Touma's right hand. Index then decides to test Touma's right hand by using her Walking Church. Moments after Touma placed his right hand on her clothes, the Walking Church is ripped apart, stripping Index completely naked. After biting Touma like a mosquito, Index toiled by herself, trying to mend her nun's habit. Fortunately, she manages to bring it back to a functional form, but only with the use of a lot of pins.

Soon, Touma is reminded of supplementary lessons and heads out. Index decides to leave as well, concerned that her pursuers would destroy his room if she would stay. As Index runs off with some cleaning robots chasing her, Touma heads to a certain high school for his class.

During his class, Touma has to toil through lessons given by his teacher in Class 1-7, Tsukuyomi Komoe, a woman who looks like an elementary school pupil. However, he instead ended up arguing with a close friend of his, a boy with blue hair and piercings. He spent the remainder of the day at school, so he ends up walking back home after he had missed the last train. On his way back, a tired Touma shrugs off an encounter with Mikoto, only to incite her electrified anger. As a result, they had to escape the security robots that were apprehending the two for the discharge by Mikoto earlier. Elsewhere, Touma is once again confronted by Mikoto after their last "fight" the night before, but Touma was able to escape unharmed due to his mysterious right hand.

Touma eats a small snack after driving away Mikoto and heads back to his apartment. There, he sees Index sprawled on the ground and surrounded by three cleaning robots. Initially relieved to see Index again, Touma's mind goes haywire at the sight of Index with a large gash running across her back.

Touma then meets one of Index's captors, a towering man with red hair and black clothes, and confronts him about Index. Upon discovering Touma's knowledge of Index's nature, the man, a magician himself, decides to explain about Index and the need to retrieve her. Then, after a short introduction, the man who calls himself Fortis931, Stiyl Magnus decides to eliminate Touma using his fire magic. But Touma survives the attack unscathed due to the same right hand that destroyed Index's Walking Church. Dumbfounded, Stiyl unleashes his most powerful fire spell against Touma, Innocentius, and manages to hold him back as Innocentius' flames kept on burning despite touching Touma's right hand.

Stiyl slowly gains the upper hand as Innocentius slowly pins down Touma. Then, despite her injuries, Index intervenes, explaining the nature of rune magic and its relation to Innocentius' regeneration rates. Although confused at Index's machine-like voice during her explanation, Touma decides to heed her advice and runs away from Stiyl's attack, escaping to the floor below.

Meanwhile, Innocentius slowly tails Touma as he discovers the futility of destroying the thousands of rune cards that are placed on the entire dormitory building. However, Innocentius stops pursuing him as soon as he leaps out of the second floor. Although relieved to have escaped Innocentius, Touma thought of saving Index, who had come back despite the risks involved. Soon, he decides to use the fire alarms to destroy the runes fueling Innocentius' regeneration ability and he makes his way back to Index, confronting Stiyl anew.

Unlike the first time, Innocentius is destroyed by Touma's right hand after the sprinkler system of the dormitory had destroyed Stiyl's rune cards, leaving Stiyl unable to defend himself against Touma's thundering right fist. 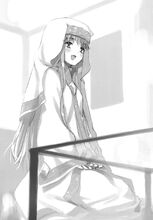 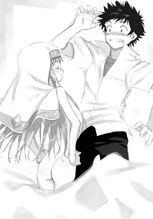 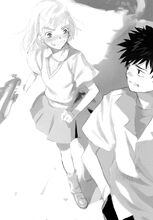 Reunion after the fight 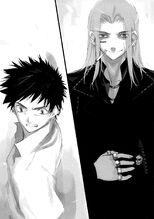 Encounter with a magician
Add a photo to this gallery

This chapter was adapted into the second segment of the first episode and the entirety of the second episode of the first season of the Toaru Majutsu no Index anime series.

Retrieved from "https://toarumajutsunoindex.fandom.com/wiki/Toaru_Majutsu_no_Index_Light_Novel_Volume_01/Chapter_1?oldid=204187"
Community content is available under CC-BY-SA unless otherwise noted.