The fact that the Anglican Church, the denomination Index belongs to, is the same group that has ordered her pursuit baffles Touma. After Kanzaki explains what they have been doing to Index during her stay in Necessarius, Touma protests, unwilling to believe the restraints in Index's memories. However, Kanzaki points out the futility in trying to fight against Index's inevitable fate, all while punishing Touma's body with her Shichiten Shichitou. Touma refuses to give in to his grievous injuries and stood firm to his belief. Although he was unable to stand against Kanzaki's strength, he was able to speak his mind against her before passing out to his injuries.

Touma, to his shock, wakes up in the Tsukuyomi Residence, three days after his encounter with Kanzaki. Although Index's "time limit" crossed his mind, Touma cannot act due to his injuries, and is forced to rest for the meantime while in the care of Index. Soon, Komoe arrives alongside two ominously familiar figures: Kanzaki Kaori and Stiyl Magnus, who are there to retrieve Index. With Touma unable to fight the two magicians in his condition, Index is forced to surrender herself for the magicians to spare Touma's life. Stiyl and Kanzaki soon leave, with the former reminding Index of the "time limit", which is twelve and a half hours away.

As midnight approaches, Touma wakes up to a call by Kanzaki, ordering him to make his final farewells before Index is retrieved. Touma takes this as an insult and points out that while magic is found useless in Index's case, science may have the solution to her current problem. After reaching an impasse, Kanzaki ends the call, leaving Touma to find out a way to save Index before midnight comes. However, as soon as he was able to reach Komoe by phone, midnight arrives, with Kanzaki and Stiyl showing up just in time. 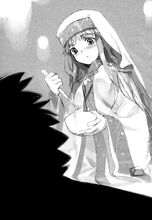 Index playing caretaker
Add a photo to this gallery

Retrieved from "https://toarumajutsunoindex.fandom.com/wiki/Toaru_Majutsu_no_Index_Light_Novel_Volume_01/Chapter_3?oldid=204185"
Community content is available under CC-BY-SA unless otherwise noted.