Deep Blood Arc
The second Toaru Majutsu no Index light novel volume was first published on June 10, 2004. Written in a span of 17 days, it is currently the quickest novel written by the author, Kamachi Kazuma.[2] The novel continues with magic side affairs as Index is once again embroiled within it, while Kamijou Touma and Stiyl Magnus, two former enemies, are forced to team up to save another girl, Himegami Aisa, while Touma has to deal with the aftermath of his memory loss.

"There, a girl has been captured."

At the city where psychic abilities are recognized — Academy City — a school named Misawa Cram School holds captive a shrine maiden. And, it seems like the perpetrator is somebody from the Magic Side. Kamijou Touma has things explained to him by the Magician Stiyl, with the former giving out obedient responses.

"Don't just nod when you want to. We're going together."

Under the midsummer sun, an ominous-looking building towers over the skyline, and two people walk towards it.

The Magician, Deep Blood, Index, and Kamijou Touma. When all the lines intersect, a new story shall begin! 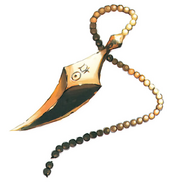