Touma parts ways with Stiyl and returns home with Index. However, he now has to think of a way to keep Index from following him to Misawa Cram School. Fortunately, he did get away after leaving Index preoccupied with her new pet cat Sphynx. After meeting Stiyl once more, they head to Misawa Cram School as they talk about their enemy, the alchemist named Aureolus Izzard, and his aim to be immortal by acquiring a vampire by using Deep Blood.

The two eventually make it to Misawa Cram School, and Stiyl reveals that the building itself is filled with illusions that can delude anyone who gets inside. Regardless, Stiyl pushes to get in, in spite of Touma's worries.

As soon as they get in, they see the corpse of a man in a suit of armor, later identified as Parsifal, a knight from England who was mutilated after failing to destroy Misawa Cram School. Touma tries to get help for the injured man, but he soon experiences the spell that isolates him, the corpse, and Stiyl with the rest of the inhabitants of the school building. Stiyl gives Parsifal his last rites before heading to the emergency access routes. Stiyl and Touma soon realize that the short ascent to their destination is more tiring than it seems, but a short but relieving call from Index motivates both to continue.

On the fifth floor of Misawa Cram School, they stumble upon a quiet cafeteria filled with students. Although Touma initially saw nothing peculiar about their actions, he later realizes the competitiveness of the students as they chat about test scores and study habits. Then, these students suddenly glare are Stiyl and Touma and began reciting a magic spell, forcing the two to flee as bright orbs begin chasing them. Stiyl quickly recognizes the spell as a copy of the Roman Catholic Church's Gregorian Chant. Since Touma's Imagine Breaker constantly makes his presence known to the enemy, Stiyl splits up with Touma, leaving the latter to deal with the students of Misawa Cram School alone.

During the descent, Touma encounters a student of Misawa who is left badly injured after attempting to use magic against the intruders. In spite of his current situation, Touma carries the injured girl as he fends off the attackers and manages to survive, just as Stiyl has managed to destroy the core of the spell replica. Stiyl ends up meeting Aureolus Izzard, who fights using Limen Magna to instantly transmute anything he hits into gold, but he quickly realizes that this Izzard is a fake. The fake Aureolus makes a hasty escape right after receiving battering words from Stiyl.

Himegami Aisa appears before Touma and reassures Touma that the girl is injured but far from death. Using her skills in reading the flow of a person's bloodstream, she performs surgery in the girl's torn muscles and guided Touma in keeping the girl from losing too much blood. Touma was left astounded by Aisa's medical expertise, but this was quickly replaced by alarm as Aisa identifies the fake Aureolus Izzard as he hastily patched himself up after the encounter with Stiyl Magnus. Driven with madness, the fake Izzard attacks Touma, only to have his attacks swatted out, albeit at the cost of severe injury on Touma's right hand. Eventually, after losing patience, the fake Izzard shoots out towards Aisa. Touma was unable to catch the attack, but the very girl Aisa and Touma saved ended up sacrificing herself to rescue Aisa, at the cost of turning into gold due to Limen Magna effects. Seeing this, Touma flies into a rage, diving into the fake Izzard.

As soon as both survive the attack, Touma dashes once more into the fake Aureolus, with a speed that startles the alchemist. He was left unable to defend Touma's attacks, and he soon discovers that he is losing his energy to even move his body. Stiyl soon appears to see the weakened fake alchemist and exchanged words with him before the fire magician destroys his body for good.

Meanwhile, as Index realizes the hardships of maintaining a pet cat, she wonders about Touma's whereabouts. She quickly heads out to look for him, but she sees the rune cards Stiyl had set up previously as her protection. Seeing the cards worry her, so she decides to track down Stiyl's location. 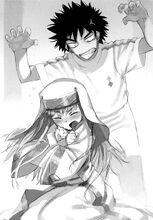 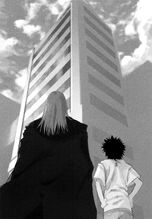 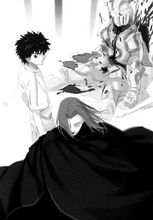 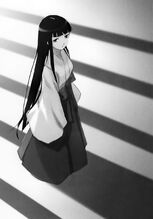 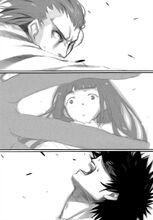 To battle the "Alchemist"
Add a photo to this gallery

Retrieved from "https://toarumajutsunoindex.fandom.com/wiki/Toaru_Majutsu_no_Index_Light_Novel_Volume_02/Chapter_2?oldid=204180"
Community content is available under CC-BY-SA unless otherwise noted.