Tension rises as the sudden capture of Orsola in the hands of the Amakusa Christians caused Agnese to mobilize the many nuns under her command. As some jumped into the hole created to abduct Orsola, others focused on strategizing using the maps they hold. Because he does not know anything about what's going on, Touma stands on the sidelines with Stiyl and Index. Despite being magicians as well, the two representatives of the Anglican Church decide to avoid causing further chaos by not intervening.

Touma soon raises the question of the purpose of his and Index's presence. Stiyl did not say much about Touma's importance, but puts emphasis on Index's role in this incident, as she is someone who has knowledge about magical texts. However, Index admits that even she can't decode "The Book of the Law". Stiyl adds that it contains power comparable to an angel's; he laughs at the assumption that Touma does not know anything about angels, but he assumed wrong, as Touma was in fact involved with an angel's power.

Index explains her assumptions about the extent of power "The Book of the Law" can give, and then Stiyl gives a short lecture on the life of its author, a man named Edward Alexander a.k.a. Crowley. He then bitterly remarks about how one cannot take the magic book lightly.

Touma suggests about burning the book, thinking that like any other book, it would burn out; Index debunks his assumption and explains that it is impossible and dangerous, as text written by magicians are infused by magic, and thus can turn into magical code that invokes that spell at the slightest exposure to magical energy, "like a starter to an engine" according to Stiyl.

As Stiyl explains to Index the engine-magic analogy, Touma realizes that he is in a situation where he can't back out midway through. However, he puts his faith in the power in his right hand.

After serving her duties as the leader of the many nuns running around Gloaming house, Agnese gets her first-time encounter with a Japanese native, which caused her nervousness to build up. What's worse for her is that her footwear became unstable at the wrong time and it sent her and Touma to the concrete road, with his head just inches away from the nun's panties.

She manages to fix herself up in time, and while gathering confidence, she starts to explain her plans involving "The Book of the Law", Orsola Aquinas, and the Amakusa.

According to Angese, she has already set up a 10-kilometer-radius perimeter, and once tried magical tracing but failed. All they can think of is that Amakusa cannot initiate their true plan in just one day, considering the number of enemies in their vicinity, and that they would use certain measures to secure the information.

Agnese soon continues on explaining, now focusing on their enemies, the Amakusa Christians. She tells them that the Amakusa are experts in hiding, either their magic or themselves. She is also confident that they would not escape the perimeter they set up. However, Index is not too sure about it.

Index tells them about a certain map that reverses the Idol Theory: the Great Japanese Coastal Map created by Ino Tadataka, one of the earliest modern maps of Japan which has managed to open portals located in 47 fixed locations in Japan. It reverses the theory such that the replica affected the original, instead of the original affecting the replica. It also debunks Agnese's thoughts of closing in on the Amakusa because of the existence of portals that the Amakusa can use.

Despite the existence of the portals now explained, Index assures Agnese with another piece of information on the Great Japanese Coastal Map; because of how the map was created, the portals are completely dependent on the positions of the stars. The time when the portals can be used is a few minutes after midnight, and they still have a few hours left.

Index borrows Touma's cellphone, which is equipped with a GPS system, and after getting help from Touma, she plots the exact location of one of the nearest portals to them.

Within fifteen minutes, Agnese's subordinates reported two unusual people. She is still worried about how the Amakusa might move and how she feels helpless in thinking about it, but Index is there to support her decision. With that, she continues with her operation, mobilizing the last 74 of the nuns under her command and estimating the operation to end within 3 hours.

All they have to do now is to rest. However, with the deadline of his assignment nearing, Touma admits that it would be a restless night ahead.

He retires to one of the many tents set up for the night, holding a piece of bread and some Italian soup, and eats his dinner before going to his own tent, accompanied by Stiyl, who decides to accompany him to protect Index, who is in another tent. A few minutes passed and Touma feels restless, so he leaves the tent with Stiyl's warning to not destroy any artifacts by using his right hand.

Touma finds himself looking around and momentarily in danger after almost falling into the triangular hole the Amakusa used to capture Orsola, and returning to his tent, hears a girl's scream.

With thoughts of the Amakusa attacking once again, Touma rushes into one tent, and discovers Agnese, completely naked, clinging to him. As it turns out, she was frightened by the presence of a slug in the tent and, because of that, is trembling in fear. Agnese soon stops trembling, but falls to the floor unconscious. Touma falls to catch her before she lands on the floor, then, sees Index on the same tent. The sight of her in tears made Touma's face pale in nervousness.

Before the commotion could grow out of proportion, Agnese tells Touma to leave, and as he returns, he decides to talk to Stiyl.

Stiyl finds himself answering a choice question; a choice between Index and Kanzaki Kaori, who have been his fellow companion to the girl with 103,000 books in her head. He shows his conviction towards Index, whom he has been trying to protect for a long time, and he has no choice at times but to follow rules, even to involve Index in this search for "The Book of the Law".

With that, Stiyl ends his conversation with Touma and sleeps for the night.

Soon, Touma is surprised to find himself time to sleep despite the tension in the air. He soon discovers that the tent has no locks in it, and he finds a girl snuggling on him inside his futon. He thinks that it was Index, however, the real Index is actually outside, half-asleep. He also discovers that Agnese is the girl on top of him, and was only wearing lace underwear. At first, Touma is relieved that Index is taking what is going on as a dream, but ends up being bitten by Index with all her strength.

Meanwhile, Stiyl wakes up to the sight of two girls near Touma and just heads back to sleep, annoyed at the commotion. 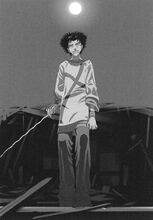 The enemy leader appears
Add a photo to this gallery

Retrieved from "https://toarumajutsunoindex.fandom.com/wiki/Toaru_Majutsu_no_Index_Light_Novel_Volume_07/Chapter_2?oldid=242318"
Community content is available under CC-BY-SA unless otherwise noted.