Toaru Majutsu no Index Light Novel Volume 10 was first published on May 10, 2006. It is the second and final part of the story that was first presented in the previous volume.

During July, the unusual event called the Daihaseisai unfolds.

At that event, a certain item shall risk affecting the event altogether: the Croce di Pietro.

The circumstances call forth Kamijou Touma, whose loved ones' dreams are at the risk of being destroyed!

For the sake of a fun Daihaseisai.

When Science and Magic cross, the story shall begin!

Chapter 5: An Intermission on a Thread of Tension — Resumption_of_Hostilities.Edit

As Touma reunites with a cheerleading uniform-clad Index, Oriana continues her part of the deal for the Stab Sword. Touma would soon join his parents and the mother-and-daughter team of Misaka Misuzu and Mikoto in a hearty lunch.

Stiyl, on the other hand, contacts the Anglican Church Library and Decoders Sherry Cromwell and Orsola Aquinas about the Apostle's Cross, and they say that it would take a longer time for them to discover the magical item's specifics.

After many unfortunate moments with Index, Misaka Mikoto and Shirai Kuroko on the way, Touma would later talk to Himegami Aisa, only to have their moment interrupted by affairs involving the Apostle's Cross.

Fukiyose Seiri is requested to stay in the hospital for an entire day after her "heat stroke" ordeal. As she finds herself making mistakes all over the place, she finds herself far from the 100% Seiri earlier.

Chapter 6: Resumption of Pursuit with an End — Accidental_Firing.Edit

Himegami begins to worry about Touma lately, especially lately, where his face reflects the same expression he had when he faced Aureolus Izzard. While Komoe helps out the transfer student, Touma and Stiyl are on the run, pursuing Oriana's next location.

As Oriana escapes with her resolve shaken by the possibility of a Saint entering the battlefield, Tsuchimikado contacts Stiyl about his status. Meanwhile, Oriana returns to District 7, where an encounter with Himegami Aisa turns into a bloodbath. Touma and Stiyl would later discover the incident, and Touma decides to push through the pursuit, with Stiyl performing a healing ritual.

Aisa knew what was going on in spite of having a sizable amount of flesh torn off by Oriana's spell, and deep inside she feels bad for making a terrible situation for her two saviors. However, Touma's promise of taking her to the Night Parade manages to assures her.

With Aisa's involvement on his mind, Touma continues on his pursuit of Oriana. He would later discover with Tsuchimikado's assistance that the Apostle's Cross might require specific requirements, and this might explain Oriana's unusual movement patterns. Despite his injuries, Tsuchimikado plans to move, now with more knowledge on the Apostle's Cross.

The identity of the last civilian Oriana attacked would shock the Tracking Sealer. Meanwhile, Touma pushes forward, expecting Stiyl and Tsuchimikado to assist him after the former has barely completed the healing spell for Himegami. While Tsuchimikado ponders about the link between the Apostle's Cross and the night sky, he gets vital information from Orsola, who contacts Stiyl wrongly to tell him about what is needed to activate the Apostle's Cross.

This condition is now a secondary task for Tsuchimikado and Touma, as they look for viable places to mount the Apostle's Cross. They soon travel to District 23, which has a better view of the night sky; coincidentally, Oriana also heads to that district, only to find the sudden change in security, which was part of Tsuchimikado's plan to confuse Oriana. Meanwhile, they would break in while the switch of security plans leave gaps that they can exploit.

Oriana ponders on her own way of thinking. She enters a dilemma that makes her doubt of the ends to her actions, that it would hurt someone to do something that would help others. Nonetheless, she hopes that what she is doing will be helpful to everyone.

Unfortunately, she made yet another mistake.

Chapter 8: The Reason for the Clenched Right Fist — Light_of_a_Night_Sky.Edit

Touma's lack of participation has already reached his parents, but they are still unwary that Touma is fighting against an upcoming invasion. Touma is still running with Stiyl and Tsuchimikado, racing against time as the activation time of the Apostle's Cross nears.

Stiyl and Touma's fight against Oriana soon concludes with Touma dealing the final blow to Oriana, However, Lidvia reveals that the Apostle's Cross is in fact outside Academy City, and Oriana was just there to lure any attackers from the true target.

As if all hope seems lost, the night sky needed to activate the Apostle's Cross spell is covered by Academy City's light-and-fireworks show.

Epilogue: The Awaiting People After the Conclusion — Those_Who_Hold_Out_a_Hand.Edit

After Touma's ordeal, he has yet to explain things to his parents and Index, who he has made worry throughout the Daihaseisai. To add, Misaka wins the punishment game, and Touma will be following Mikoto's orders soon.

Meanwhile, Lidvia Lorenzetti's plan to deploy the Apostle's Cross failed dramatically, and desperately flees back to the Vatican. On her way, she would face the unseen wrath of Archbishop Laura Stuart.

Back in Academy City, as Aleister Crowley recalls the actions of the Roman Catholic Church against the Academy City, several victims of Oriana Thomson's attacks have fully recovered. Himegami Aisa, now in a more stable condition, talks to Index about Touma and his heroics. 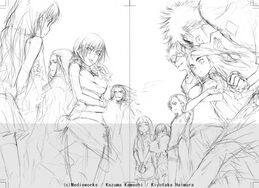 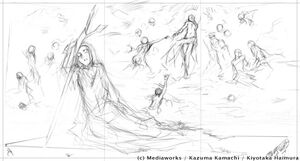 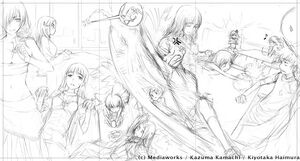 Back cover illustration
Add a photo to this gallery

Retrieved from "https://toarumajutsunoindex.fandom.com/wiki/Toaru_Majutsu_no_Index_Light_Novel_Volume_10?oldid=302450"
Community content is available under CC-BY-SA unless otherwise noted.