Acqua of the Back and Villian

British Royal Family Arc,
Part 2
Toaru Majutsu no Index Light Novel Volume 18 was first published on July 10, 2009. It concludes the two-part storyline in the previous novel, ending the British Royal Family Arc. The conclusion of the novel is concurrent with the end of the next novel, setting up the finale of the first novel series.

London, the headquarters of Necessarius, to which Index belongs to. This city of magic has fallen due to a coup by the "Knight Faction" led by Knight Leader. Because of the coup, the entire country of Britain collapsed into disorder, with ordinary citizens being restricted by the military. In the midst of the upheavals created by the "Reforms" of the "Knight Faction," Necessarius, with the numerous magicians, continues their war of resistance in various places.

Kamijou Touma, who traveled to Folkestone in order to save Index, had finally reached the mastermind of the coup. There waits Acqua of the Back, from "God's Right Seat". And, pointing the tip of a blade towards him, stands the figure of the second princess of the British Royal Family, Carissa...!

When science and magic cross paths, the story shall begin...! 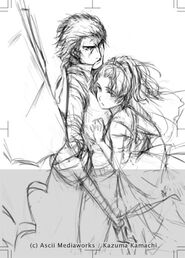