Toaru Majutsu no Index Light Novel Volume 19 was first published on November 10, 2009. It deals with GROUP's and Hamazura Shiage's final efforts against the Dark Side of Academy City. The ending of the novel is concurrent with the ending of the previous one as a set-up for the finale of the series. 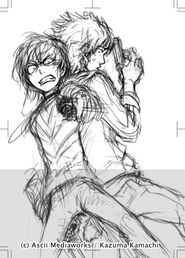 Retrieved from "https://toarumajutsunoindex.fandom.com/wiki/Toaru_Majutsu_no_Index_Light_Novel_Volume_19?oldid=187557"
Community content is available under CC-BY-SA unless otherwise noted.