World War III Arc, Part 1
Toaru Majutsu no Index Light Novel Volume 20 was first published on March 10, 2010. It marks the first usage of three-part novel storyline in the novel series. It is the first novel that depicts the events of World War III for the finale of the series. It gathers all three protagonist in the same novel for the first time since the first SS novel.

Russia declared the beginning of the Third World War.

The conflict between Academy City and Russia will expand to the level where it will involve all other nations. The ones behind the scenes manipulating it all are the last member of "God's Right Seat" and the bearer of the "Holy Right", Fiamma, and the man who watches and plans in secrecy, unknown to the rest of the world, Aleister Crowley.

In the fires of the World War, there is a group of people that run to and fro.

A high school student of Academy City, Kamijou Touma, aiming to free an unconscious Index from the grasp of Fiamma after the incident of fighting over an artifact in England.

The strongest esper, Accelerator, aiming to save Last Order, who’s in a critical condition after the mysterious appearance of the entity "Aiwass".

Originally a lackey for the group ITEM, Hamazura Shiage, aiming to save Takitsubo Rikou who is physically weakened after she overdosed herself on the "powder" that boosted her abilities. 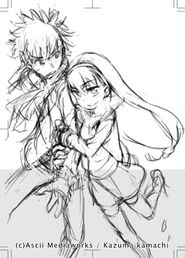