Toaru Majutsu no Index Light Novel Volume 21 was first published on August 10, 2010. It is the second novel that depicts the events of World War III for the finale of the series. It features the continuing efforts of the three protagonists with their own individual struggles. 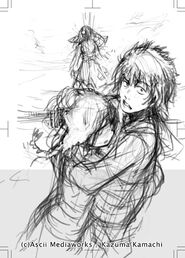 Retrieved from "https://toarumajutsunoindex.fandom.com/wiki/Toaru_Majutsu_no_Index_Light_Novel_Volume_21?oldid=187559"
Community content is available under CC-BY-SA unless otherwise noted.