Skill-Out Uprising
Toaru Majutsu no Index SS was first published on July 10, 2007, technically making it the 14th novel published in the series. Despite its name, much of the story is dedicated to Touma and Accelerator's point-of-view, which later converges in the end. It also features Hamazura Shiage, the future third protagonist of the series. The "SS" part is likely taken from the side story of the girls from the Necessarius through Kanzaki Kaori's point-of-view. This is the first sidestory novel by the author Kamachi Kazuma, a format which would later be a recurring staple in expanding the world of Toaru Majusu no Index.

It is also notable for being the first novel published after the debut of the Toaru Kagaku no Railgun manga. 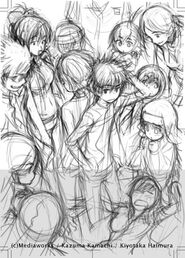