The tankobon details the second part of the Kazakiri Hyouka Arc. As Hyouka despairs over the revelation that she is the key to the Imaginary Number District, their worries don´t stop as Sherry continues to assault the city in order to draw it into a war between the two sides, magic and science. Hyouka is forced to accept that she is a monster born from the Imaginary Number District, and much to Touma's fears, haphazardly faces off against Sherry Cromwell.

Then I’ll teach you that your illusion will not be broken!!

The magician Sherry Cromwell is trying to bring about a war between the magic side and the science side. And what is Kazakiri Hyouka’s secret...!? The timid and bit of a crybaby friend..., the Kazakiri Hyouka Arc’s magnificent conclusion!! 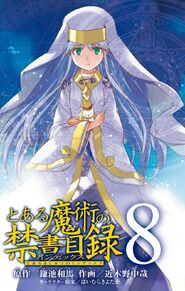 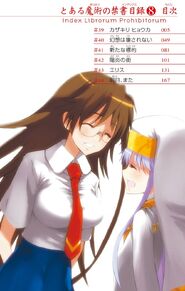