The tankobon deals with the final part of the Orsola Aquinas Rescue Arc. After it is revealed that the Church wants to kill Orsola Aquinas for being to able to decipher the Book of the Law, a book that would supposedly end the age of the religion of the cross, old alliances are broken, and Touma is left on his own to save Orsola Aquinas. As Touma faces off against the Agnese Forces, a technicality allows Stiyl and Index to join his cause, and is later aided by the Amakusa-Style Remix of Church. Now, with a combined force, the ragtag bunch of characters, they face off against a contingent of one of the largest denominations of Christianity, and its vicious leader, all for the sake of Orsola Aquinas.

The ulterior motive of the Roman Catholic Church is exposed! The Book of the Law Arc’s conclusion.

Touma’s group have rescued Orsola from the Amakusa Style Church. However, they are told that the girl will be killed by the hands of the Roman Catholic Church to whom they handed her over to! For Touma’s group, what should they believe and what should they protect...!? Highly popular! Science x Magic school action’s 10th volume!! 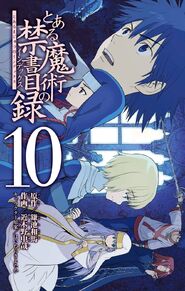 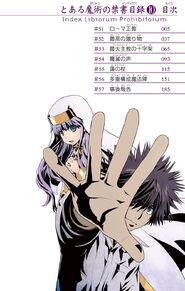