The tankobon deals with the entirety of the adaptation for the 8th Index light novel volume. News of rockets from across the world are fired towards space reaches the ears of Misaka Mikoto and Shirai Kuroko, and though Kuroko pays no heed towards it, she notices something strange with her friend. It is not until Kuroko receives a job for Judgment that she discovers how deep her friend is in certain dark corners of the city, as she must contend against a powerful teleporter, who does not need to touch in order to teleport things. Musujime Awaki is her name, and she has the Remnant of Tree Diagram, which she reveals to Kuroko has been destroyed recently, but more importantly, it is related to the secret world of Misaka Mikoto.

The nightmare that became a remnant, once again appears before their eyes...

News of a certain incident reaches two girls after school. Due to this, the anxiety the girls had been fearing is becoming a reality; the nightmare revives once again in Academy City–––...!!? Highly popular! Science x Magic school action’s 11th volume!! 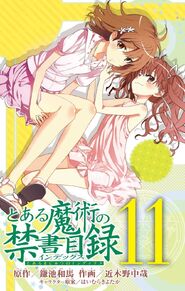 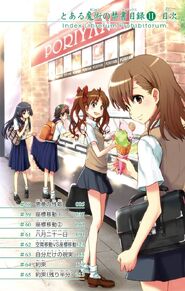